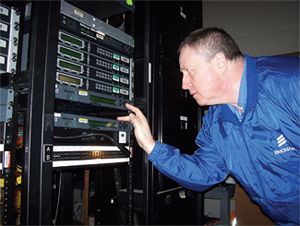 VANCOUVER
The big jump into new media for NBC took place at the 2008 Beijing Games, which saw an order of magnitude more video streaming and highlights production for the Web and other forms of digital delivery than Torino in 2006.

Despite the size of that effort, and the fact that so many aspects of that production were new, Beijing's new media broadcast was a success. But it was complex.

Vancouver's new media production benefitted from the Beijing experience and a few other factors that allowed it to reign in the complexity while still producing a lot of well-received product.

John Wagner of Ericsson checks one of the MPEG-4 AVC HD encoder and receiver systems used for NBC's coverage. One factor was the smaller nature of a Winter Games—there were just fewer events to cover. Another was the availability of a large pool of English-speaking interns familiar with North American sports, working in an IBC-based "Highlights Factory" to produce clips-based content.

The importance of clips-based content as opposed to long-form content was one of the lessons of Beijing, according to Perkins Miller, senior vice president, Digital Media, NBC Universal.

"One thing we learned in Beijing was the power of highlights to drive consumption," said Miller. He said the Highlights Factory (HLF) generated 1,600 highlights clips in 17 days in China, and the per-day pace in the smaller Vancouver Games was just a little off that rate.

Miller said that keeping the HLF in house, in Vancouver, had the benefit of keeping it near the producers. It also allowed for a substantially less complex workflow than the Beijing iteration.

The Beijing new media clips effort had involved proxy video being sent to an extensive @Home presence in New York, where EDLs were generated and returned to Beijing before needed full-res content was sent home. This was complex because it involved synchronized databases, proxies, and workflows between cities. NBC had known this was going to be a challenge, but it was even harder than they had anticipated, all for a show only 17 days in length, albeit a big show.

But Vancouver had one big characteristic that helped keep system complexity down—a wealth of local college students and interns who didn't require travel and housing, spoke English and who knew more than a bit about hockey and other cold weather sports. This meant an on-site staff was possible.

And once this staff was on-site, they were next to where the hi-res content was, said Mazza, and it was not that challenging or expensive to put in the added infrastructure that allowed them to look directly at the high-res video. This negated the need for the proxy layer, which was previously required to be synchronized between cities, along with the intercontinental high-res conforms, resulting in an overall simpler workflow.

NBC did have a limited @Home presence in New York this time around, but with less dayparts on the air and less sports, it was simpler and did not involve a lot of transmission between sites. This four-person team was essentially an encore factory that produced content from material that had been broadcast. The team grabbed off-air content, sliced out the commercials, and repackaged and posted it out to the Web.

"That was the one thing that we could break out cleanly from here as that was a workflow that was different," explained Darryl Jefferson, project manager for the Highlights Factory and director of Post Production Operations for NBC Olympics. "They needed things post-commercial and here we dealt with things north of commercials."

HLF clip production in Vancouver may have been less complex than Beijing's continent-hopping procedure, but it remained a long-distance file-based workflow, even if it was now only going one way. Although making content and sending it home as a file sounds easy, such workflows still require debugging, so "simpler" is a relative term.

The Vancouver HLF staff dealt directly with the output from one of nine EVS XT [2] servers that were dedicated to new media and distinct from the 40-plus EVS units in the IBC and at venues. Seven of the nine servers were recording host material full time and the remaining two were dedicated to edit suites, although even these had a record channel available for high volume days. Jefferson said the key thing was the ability to ingest and access everything: "The EVSs were perpetually in record, so it's just a matter of nimbly routing the programming to them."

The routing and recording relied on Cyradis machine control querying NBC Olympics' facility-wide ScheduAll interface. Cyradis would grab the router call and the competition schedule from the ScheduAll schedule and turn that into clips being created automatically on the EVS side. Cyradis controlled the router, controlled in and out points, and controlled which XT channel the event should be recorded to.

Individual record channels were generally assigned to HLF Editors (the intern level of the HLF), who used EVS IP Director, a small integrated PC with a video input and serial control board added to it as well as EVS proprietary software. It could index and search the content of all the XT[2] servers, as well as the Omneon Media Grid nearline storage.

HLF Editors used IP Director to create media, marking ins and outs and creating playlists with basic cuts and even adding some dissolves and wipes. IP Director also allowed them to grab things from the archives when needed. The output of the HLF Editors would be evaluated by a supervisor, a "light touch super," who watched the shot selector output in real time, also on IP Director.

Another tier of content creation was the Producer-Editor, or "Preditor," who worked with EVS's more advanced IP Edit software. This material would often be cross-sport and a bit more in-depth. It took advantage of IP Edit's more advanced audio and graphics capabilities. A third level of creative was a Craft Editor, who worked in conjunction with a producer and used tools familiar to the broadcast world, such as an Avid or an IP Edit, in conjunction with a downstream keyer and an audio console.

After a supervisor approved a clip, EVS XT Access servers flattened and re-wrapped the DNX100 files from the Avid/EVS world into an OP-1a MXF wrapper, before landing the content on an Omneon MediaGrid. Omneon ProExchange transcoded it to 50 Mbps Long GOP before transfer to New York via Omneon ProCast file acceleration. It then arrived on a MediaGrid in New York, where active watch folders were picked up by MICAH, an in-house transcoding and publishing platform. From here files were moved over to NBC's Rhozet distribution farm, where it was transcoded for a variety of distribution platforms, (Web, iTunes, VOD, etc.).

THE BENEFIT OF SPEED

One of the real benefits of the somewhat simpler clips production was speed, a function of less transcoding at the beginning of the process.

"The biggest benefit we got was that everything was effectively real-time, there was less delay in getting access to the material," said Matthew Green, digital media engineer, NBC Olympics IT. In Beijing, there was up to a 5-minute delay between something being recorded and when it was useable by shot selectors.

Green, who started with NBC Olympics as an intern before transitioning into the IT department and eventually a position supporting the Beijing Highlights Factory, said that large scale projects in new media are still relatively new, compared to comparatively established broadcast workflows.

"Beijing showed us that we do need a lot of development time if we are going to come up with something new, and Vancouver showed us that even when we are using something that is a bit more 'off-the-shelf' in terms of an integrated system, tying it in with other products still takes time to make sure that it works smoothly," said Green. He said that they really had no issues on the ingest side, other than just making sure they had enough recording space each day.

The benefits of experience also pertain to business models. Miller said another lesson from Beijing and recent years was how to monetize longer-form content more effectively.

NBC's Highlights Factory Editors in action during the Games. Specifically, he mentioned "Sunday Night Football Extra," a live video player for Sunday Night Football. "We did live ad insertion that essentially covered up the in-broadcast commercial inventory, and that process for using live ad insertion to cover up the incremental broadcast inventory creates a whole new opportunity from an economic standpoint for digital media," said Miller. "For these Games it's been tremendously efficient for when we've done our big hockey games as well as curling… we've delivered a lot of video impressions."

In Vancouver, hockey and curling were always live on the Internet. All other sports were available as soon as they had been broadcast on the West Coast.

As for possible concerns that clip or streamed content could cut into the broadcast audience, Miller said the Sunday Night Football and Beijing experience suggests the opposite—online streaming access actually promotes the broadcast coverage.

The streaming side of new media, like the clips content, used a different workflow this time around. In Beijing the encoders were on-site, whereas in Vancouver the encoders were in Las Vegas, resident at an external partner company called iStreamPlanet, which took in 20 raw host feeds directly. Tandberg/Ericsson encoders for NBC network and cable feeds and other content were used to transport streams to Las Vegas via an OC12 circuit.

iStreamPlanet converted feeds to baseband before ingest into Inlet encoders, and transportation in multiple bit-rate profiles to Microsoft's ECN content delivery network. Silverlight was again the player, which supported multibit-rate streams (from 500 kbps to 3.5 Mbps) and a variety of user controls.

Miller said it had made sense to encode in China because with the much higher volume of events there, they saved a lot on transport.

Miller said it was hard to predict what consumer devices would be available and popular by the time of the 2012 Olympics from London. "iPhones weren't effectively here a year and a half ago as a platform, and now it's our leading mobile platform—we'll do more than 70 million page views and somewhere north of 2 million streams on the iPhone application alone."

He said new media planning would need to account for laptops that manage 5 Mbps downstream, social networking software like Twitter, how to handle commentary with a larger number of sports, the ever-increasing demand for higher production values on the Web, and iPads and other tablet consumer devices.

"There are a lot of things you have to anticipate and build for," said Miller. "And always while driving revenue."