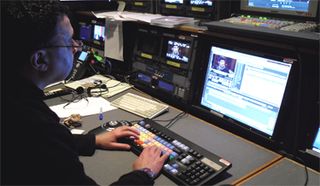 VANCOUVER
Like many parts of NBC's section at the IBC, the edit rooms benefited from operators with multi-Olympics experience, and workflow and equipment refinements that made an intense job a bit easier.

The main technical headline was the fact that the Avids could now edit Long GOP files directly, which allowed the second gen PDW-F1600 XDCAM decks to almost mimic a disk drive in the edit suite.

Howie Hirsch, the last linear staff editor at NBC Sports and a 26 year veteran, plied his craft in Vancouver. In Beijing Avid had only just released software that allowed its machines to edit Long GOP directly, but it was too close to Opening Ceremonies and to be safe, NBC only used that software in two New York suites. All the machines in Beijing took files down to baseband off XDCAMs.

In Vancouver all the Avids were Long GOP-ready, and it allowed NBC to go to a file-based workflow between the XDCAM decks and the Avids.

"Now they can effectively use the XDCAM decks as if they were a disk drive," said Brian Longenecker, post production supervisor for NBC Olympics. "The real gain is being able to bring [XDCAM content] directly in to the timeline now, and edit with it without having to ingest it in HD-SDI and convert it into Avid DNX code." Longenecker said this sped up ingest by 2.5x or 3x.

The ability to take Long GOP directly in to the Avids was also done with the SxS cards used as recording media by NBC's Sony EX3 camcorders, which were used as second cameras on some shoots. This ingest was via a USB reader and Longenecker estimated this resulted in about a 2x transfer rate.

NBC has also been refining its workflow to better manage the creation of duplicate media on the Avid ISIS storage.

The workflow involved utilizing a central ingest room with three IP Directors and an EVS XT[2]. Live feeds coming into the IBC were recorded on the EVS XT. Production personnel would then log the feeds and immediately push the selected clips to an Avid ISIS, where the material was made available to the whole edit facility via Avid's InterPlay software.

"We had a much better management scheme than we did in Beijing," said Longenecker. "We virtually eliminated the creation of redundant media."

He added that becoming comfortable with search tools made this an acceptable situation in Vancouver. "Everybody has realized that they don't always need to acquire [content] on their own—they can always use Interplay to find it."

Longenecker said the overall workflow was significantly easier and faster than at prior Games, facilitated by the Avids' ability to mix and match frame rates and formats in the timeline.

"Now, we don't even have to standards convert out material any longer," he said, "which has always been an issue for us as the Olympics operates in the format of the host country."

If an editor wanted PAL video from Torino, for example, he or she would normally have to standards convert the material. "Now we flip the deck to PAL mode, we open up a PAL capture project on the Avid... check it in to Interplay, open up the edit project, import the material and away you go," said Longenecker. "Conversion is done on the fly."

Vancouver was a smooth effort, according to Longenecker. "In Beijing we felt comfortable with the edit workflow three or four days before Opening Ceremonies, whereas here we felt we had everything configured well a week before opening. In Vancouver we perfected the workflows that we started in Beijing, it really worked and to their credit the edit staff really embraced the new workflow."

In Vancouver there was a lot less editing work kept in New York as part of the network's "@home" split production initiative. Four seats of Final Cut Pro for promo creation were located at 30 Rock, fed by a Vancouver "fetcher room," a group collecting HD material from the EVSs and ISIS for both New York and NBC Universal Sports analysis programming in California.

The fetchers used IP Director to find media on the EVS network, and Avid Interplay, Access and Assist, to find material on the ISIS. They also could access the Blue Order Asset Management System, so they could find anything that was recorded in central tape.

Beyond any venue-based editing, Longenecker said the 13 Avid edit rooms in the IBC housed 23 Avid edit clients, six Symphonies and 17 Media Composers. There were two Traditional Online Edit Suites (TOES, and sometimes the Online part of the acronym becomes "OLD") and 12 Interplay Assist stations as well. Between the venues and the IBC. NBC had 45 Avids and just five linear rooms.

But linear editing still has its place, even if it is modernizing in its own way.

Howie Hirsch, a 26-year veteran, and the last linear staff editor at NBC Sports, plied his craft in Vancouver. He said the TOES rooms were designed for quick turnaround. An example would be if there was any kind of small time delay for returning to the states.

"Perhaps we have just an hour," said Hirsch. "We'll record to an EVS as the event is coming in, and we would have an AD and a producer here [the TOES room] talking to the on-air talent; and as I'm recording, the on-air talent would be voicing it as it comes in… as live. As soon as the event finishes, I'm done with it, I graph it going through a switcher, I turn it around and it can go to air almost immediately."

The linear rooms even got a bit of modern functionality through connection to an EVS server sitting in for the VTR or XDCAM deck. "This gives the TOES suites a little nonlinear functionality," said Hirsch. "[We] don't have to watch the whole event down if a producer knows there's some point in a recording they need to pull up, they can do it in a nonlinear fashion."

The choice of controller also has been updated—although some staff were still using the venerable Sony 9100, which could actually control the much more modern EVS XT[2] servers via very well-established Sony VTR control protocols. Staff figured out how to trick the XTs into acting like a tape machine—the VTR "eject tape" command worked to reload a clip assembly, etc.

"The PIE has been updated quite a bit from the traditional 9100," said Hirsch. "It's able to talk to the switcher much better than the 9100, it can deal with the switcher as a timeline which pretty much brings it fast forward into the nonlinear world, where you can do multiple things at the same time."