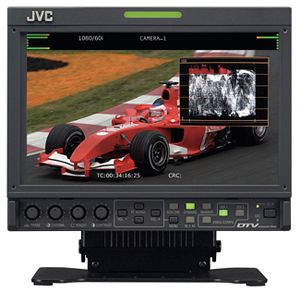 One major feature of flat-panel displays is that they scale down beautifully. You used to be able to get a five-inch CRT, but it was surprisingly bulky, heavy and power-hungry. Flat-panel displays are a small fraction of the size and weight of their CRT ancestors, and they take tiny sips of power in comparison.

Sony's prototype 4.1-inch OLED monitor can be rolled up.
There are currently four distinct technologies used in flat-panel monitors: plasma, liquid crystal display (LCD), light-emitting diode (LED) backlit LCD display, and organic light-emitting diode (OLED) display. Each has its advantages and disadvantages when compared to the others, but all are far thinner and lighter—and consume less power—than CRT monitors of similar display size.

Of these four flat-panel technologies, two are thinner and lighter than the others, and they also typically consume less power: LED-backlit LCD and OLED. Since reduced size and power consumption generally means that these particular technologies offer more design and installation flexibility, let’s take a look at what makes LED-backlit LCD and OLED monitors significant and what that might mean for future displays.

As mentioned earlier, there are two different types of LCD displays: LED-backlit and cold-cathode fluorescent lamp (CCFL) backlit. CCFL-backlit LCD displays have been around for many years, and are the most common type used for video displays and computer monitors, both for desktop use and laptops.

CCFL LCD screens are inexpensive and can be made quite thin, as you can see by looking at any laptop computer. The CCFL backlight doesn’t make much heat, so it is power-friendly.

However, CCFL LCD displays have a constant light glowing behind the LCD screen, so the black parts of the image often appear to be a dark gray. Thus it is said that CCFL LCD displays don’t have a contrast ratio as high as other flat-panel display technologies. If you require inky blacks, CCFL LCD monitors are not the best choice.

The JVC DT-V9L3DY is a high-performance nine-inch LCD display with builtin waveform monitor. There are two variants of LED-backlit LCD displays: edge-lit and full-array. In a full-array LED-backlit system, the main LCD panel is lit with an LED lighting array that covers the entire back of the display screen, just like a CCFL LCD monitor. One big difference is that the LED backlight can be turned on and off by regions, so that black areas of the image can be deeply black when the LEDs in that region produce no light.

The main advantages of LED-backlit LCD panels are improved contrast ratio and thinner display construction, although both of these depend on the type of LED backlight. Overall, LED-backlit panels generally have similar brightness levels and viewing angles as CCFL LCD displays.

It’s also important to remember that the “LED” in the name simply describes the backlight and does not actually describe the technology producing the display. The actual display technology is LCD.

Compared to backlit-LCD technology, OLED displays are a different flock of photons. LCD displays work by using an LCD to control a backlight, and light passing through the LCD “shutter” accounts for some of the drawbacks to LCD displays. Limited viewing angles and difficulty in displaying deep blacks are a couple of the better-known compromises with LCD monitors, although these can be minimized by good engineering.

With OLED displays, light is emitted by diodes on the viewing surface—there is no other light-emitting component such as a cold cathode fluorescent lamp or an array of LEDs.

Another major benefit of OLED displays is that they are exceedingly thin, so thin that they can be made flexible and rolled up. Imagine routing a 6x9-inch depression 1/8-inch thick in a podium top and fitting a screen into it. In a pinch, a 10-inch OLED monitor can be duct-taped to a wall with a single strip of tape no longer than a finger.

OLED displays are so thin and so lightweight that they have essentially taken over as the display of choice for smart phones. Although the Apple iPad uses an LED-backlit LCD display, look for Apple to migrate to OLED technology in the near future, as it will allow the iPad to have the same size screen in a smaller, lighter package. (No doubt Apple’s competition is working on this right now.)

Professional OLED monitors in both 2D and 3D versions are made by a variety of vendors, including Marshall, Sony, Plura and TVLogic, although none yet offers a super-thin version that fits into a shallow depression or rolls up.

OLED monitors have a few drawbacks compared to more traditional LCD monitors, not the least of which is higher cost. Most experts believe that the cost of OLED monitors will come down with economies of scale, as there is nothing inherently expensive about the technology.

Early OLED monitors had problems with the life of the blue pixels, but the technology has advanced to the point where blue OLED pixels have a lifespan approaching that of LCD displays. Another drawback of OLED monitors is that the organic material in the display is susceptible to water damage.

The rapid rollout of OLED displays in smart phones demonstrates that the technology can be manufactured in large quantities and that it can withstand rough use and real-world conditions. DuPont announced in May that it can produce a 50-inch OLED display in two minutes using a process similar to inkjet printing, and Samsung and Sony (among others) have demonstrated large-screen OLED displays.

The rapid acceptance of LCD displays has brought great flexibility where large viewing surfaces are needed. However, LCD monitors are still relatively bulky and heavy compared to the next generation of OLED displays. These lighter and smaller displays will wind up in niches where monitors weren’t previously considered.

Do you need a glovebox lid that’s a monitor or a viewing system in the back of a notebook? These and other designs are coming and it’s going to be very interesting.