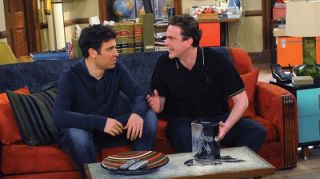 For many editors, receiving the golden statuette during an Emmy Creative Arts Awards ceremony for “Outstanding Multi-Camera Picture Editing for a Comedy Series” would represent the peak of a successful career. For Sue Federman, this was her second Emmy from the Academy of Television Arts and Sciences for cutting the same show, “How I Met Your Mother.”

The Academy’s recognition actually represented the pinnacle of Federman’s second foray into the creative arts. You see, she started her career as a professional violinist for 10 years with orchestras in both Honolulu and San Francisco.

CAREER CHANGE
Federman remembers back to why she decided her life had to contain more than just fiddling around.

“I just never felt playing the violin in the orchestra pit was my thing,” she said. “Now I sit in a darkened edit bay plowing through a massive amount of source material incorporating my love of music with a desire to tell stories. And I am much happier.”

Federman found guidance for her career change from a group called Alumnae Resources who helped her understand that her forté was in mental creativity instead of enduring the performance pressures of being part of a live ensemble.

A classic book originally published in 1953, “The Technique of Film Editing” by Karel Reisz & Gavin Miller, inspired Federman’s quest and gave direction to her mid-life career change. After attending a film-production workshop at University of Southern California’s Cinema Department in the summer of 1994 that included an editing class taught by Charles Domokos, Federman joined the wave of Hollywood hopefuls looking for any job she could get that would bring her close to editors and editing.

During one of Domokos’ field trips Federman met Bill Steinberg who let her assist him cutting a low-budget feature and she later became an intern at San Francisco’s Phoenix Editorial commercial house. That’s where Federman was introduced to Avid editing, and her ability to learn and ultimately teach computerized post production opened many assistant editing doors for her, from offbeat commercials to Roger Corman indies.

“I think what it was through all of it is that when you have such a strong intention of what you want to do, things just sort of fall in place,” Federman said.

By 1996, she had gathered enough hours of editing work to join the union, but she had to spend December behind the violin playing “The Nutcracker Suite” with the San Francisco ballet orchestra to raise the initiation fee.

Steinberg, the man she calls “her angel,” helped get Federman through the doors at Universal Studios in part to teach veteran film editors new Avid skills on shows such as “Coach” under the mentorship of editor Andy Chulack.

Accepting an offer to get into television work at Paramount Pictures, Federman earned the opportunity to do some real cutting on several sitcoms including “Becker” and “Frasier” until she moved into the editor’s chair on “It’s All Relative.”

FLASHING FORWARD
In 2005 she was asked to edit the multicam show at Fox, “How I Met Your Mother,” by its creators Carter Bays and Craig Thomas. Coming on after the pilot (cut by Kirk Benson), Federman has edited almost every episode so far in the show’s eightyear run on CBS.

A large part of the popularity of “How I Met Your Mother” is due to its recurring structure. Just as the latest CSI-style shows re-assemble a crime scene by looking chronologically backward, “How I Met Your Mother” deconstructs the youthful romantic adventures of Ted Mosby (Josh Radnor) from the perspective of 25 years in the future as an off-camera narrator (Bob Saget) relates them to his usually unseen son and daughter.

The episode Federman took home the Emmy for this year, “Trilogy Time,” revolves around a series of flash-forwards as the show’s central male horndogs, Marshall Eriksen (Jason Segel) and Barney Stinson (Neil Patrick Harris) gather with Ted every three years for a male-bonding session of watching the original “Star Wars” trilogy. Each tri-annual time jump reveals the disparity between where they thought their lives would be and the everyday reality they actually face.

The fast-paced editorial style Federman has established for “How I Met Your Mother” benefits from each episode being shot in three days at Soundstage Studio 22 in Los Angeles without an audience.

Ted (Josh Radnor), Marshall (Jason Segel) and Barney embark on another “Trilogy Time,” where they get together every three years to watch the “Star Wars” trilogy and envision what their lives will be like in another three years. “Since we don’t have to wait for live audience laughs we can accelerate the rhythm of the humor,” Federman explains. “There are flashbacks, flash-forwards and even some musical numbers, so it is a very busy production editing-wise. But my two assistants, Daniel “Steely” Esparza and Tamar Feder, work as a tag team to keep track of all the material.”

Federman explains that the pace of the whole show is established in the edit bay. As she puts it, “The show’s creators, Carter and Craig, like a snappy momentum in each plotline. They like it fast, and sometimes we make it super-fast.”

This all harkens back to Federman’s musical roots.

“Everything is more in slow motion on the set and that’s reflected in the dailies,” she said. “Then I tighten it up based on the way the actors say their lines and add little laughs to it. We also utilize a lot of swish pans to make sure things keep moving.”

For Federman, a key editorial technique is to utilize connections between the actors such as an eye move or hand gesture to motivate each cut.

“There is not a lot of waiting for things,” she said. “I think our audience is pretty savvy and can keep up with our punchier pace just fine.”

CBS has renewed “How I Met Your Mother” through 2013. If this column were an episode of the show, we’d probably flash forward to, perhaps, see Sue Federman standing on the stage at the Nokia Theater yet once more. That is, if she hasn’t changed careers again by then.

Jay Ankeney is a freelance editor and post-production consultant based in Los Angeles. Write him atJayAnkeney@mac.com.