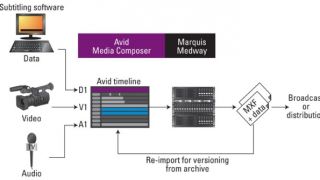 These days, increasing volumes of content are being repurposed for Internet distribution. In mid-January, the FCC issued the implementation schedule and standards for web captioning based on the 21st Century Communications and Video Accessibility Act of 2010. This means captioned content must retain closed captions when broadcast on the Internet.

Because closed captions have been used over many years, archives of captioned content in multiple formats currently exist, and the challenge is to convert this material into web content with the closed captions intact. Further issues are presented if the programs need to be edited or shortened, or the commercials need to be removed prior to web broadcast.

Figure 1. In this installation, Medway provides simple media transfer and conversion services between the Avid edit environment and broadcast server.

In this instance, the solution allows media destined for the Internet and the captions associated with it to be edited at the same time, enabling easy conversion of material without caption loss. Such a workflow reduces the amount of manual operation as there is no requirement to re-edit the whole closed-caption sequence separately. The cost-efficient workflow ensures editors can get the process right in one process execution.

Medway transfers both essence and metadata, wrapped in an MXF file, enabling the entire production process to be maintained in a digital environment. Media can be rewrapped and transcoded during transfer wherever necessary to ensure minimal production delay. The need to produce interim files, or go out to tape, is totally removed, minimizing the chance for operational errors and significantly improving output quality.

The solution creates a unified working environment for broadcast ingest, post-production editing and transmission playout. Acting as a central hub for the facility, Medway transfers media and associated metadata at faster than real-time speeds over standard data networks. Where the workflow involves a mixture of media formats, transcoding is automatic.

Metadata is gathered from the NLE workstation and augmented, either by the user based upon local rules for that particular type of transfer or from MAMs or servers. By allowing metadata to be managed and moved with its associated media, Medway enhances media tracking by ensuring media can never be lost. This maximizes the return on expensive assets.

For web content, HD material might be converted to a lower resolution by a variety of third-party applications. Linking in this way allows the closed captioning to be edited at the same time as the conversion to SD takes place.

Complex digital workflows can be hampered by expensive and repetitive operations brought on by file incompatibilities. With the move to file-based production workflows and recent legislative changes, Medway represents an effective way to manage metadata capture and transfer.

This solution supports moving essence and captioning data to and from editing and delivery to storage, archive and playout servers. The platform also supports full integration to MAMs and automation systems. Because Medway efficiently scales, it works well in installations ranging from a simple and straightforward workflow to more complex and advanced workflows.