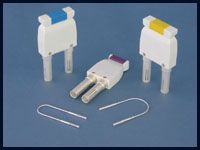 Server-based systems in production, post-produc- tion, news gathering and playout bring increased efficiencies and productivity. Nonlinear editing and news gathering allow users to access the same material across a data network. Digits are here and over the next decade will increasingly dictate the form of cables and connectors, from camera through to playout.

These 75 V MUSA U-links are designed for digital signals.

Technology rolls on, but broadcast cables and connector paths will always be designed to combat electrical noise from EMI, RFI and capacitance variation.

The two most important electrical qualities in audio cables are inductance and capacitance because they dictate characteristic impedance and propagation rate — the speed at which the signal passes through the conductor relative to the speed of light. Impedance is the total sum of opposition to the flow of energy through the cable and is what really enables different cable designs to achieve different sound quality.

The balanced audio hot/cold/screen concept is the first good reason for twisted pair audio cables. To combat electromagnetically created voltages such as mains hum, the twisted pairs will have varying lay lengths so that the magnetic fields in each pair do not align. A grounded screen can help reduce/eliminate electrostatic hum and is especially important on long cable runs. Quality and type of shielding here are important.

Oxygen Free copper to DIN 40500 Part 4 is fast becoming the norm. The elimination of oxygen by casting and annealing it in an inert gas produces a product with fewer impurities in the skin of the conductor where most of the signal will be carried.

Analog pairs can be quite forgiving of digital signals over shorter runs, but a good digital cable, because of its low capacitance, is great for analog signals. Digital cables will also future-proof an installation while greatly improving signal stability and noise immunity.

The embedding of digital audio with a digital video signal in TV applications requires the use of high-quality 75 V coaxial cables. Coaxial cables will carry digital audio further than twisted pairs. If you are not embedding, however, the cost of baluns or multiplexers can be the deciding factor in using coax. Neutrik produces AES/EBU baluns that plug directly into the back of broadcast kit to convert 3-pin 110 V XLRs to a 75 V interface. On the other hand, terminating an embedded coax is simple because generally only one type of BNC or F connector is involved.

Digital cables must be dimensionally stable because any change in the designed distance between conductors and screen will alter the capacitance — hence, the impedance and the resulting return loss. Choice of insulating material is important because in a screened audio or video cable, the insulator is the capacitor dielectric between core and screen and, the lower the capacitance, the less time it will take a signal to reach full amplitude.

For low-noise applications, the star quad construction is often used. A quad is a 4-wire construction in which diagonally opposed conductors are used to form two pairs. These cables are manufactured with low capacitance polymers and fillers so that they keep their shape if bent or crushed. They are flexible and well-shielded because of the spirally applied, not braided, fine copper wire screens over each quad.

Another popular cable is the AES/EBU 110 V, twisted pair digital microphone cable, suitable for use in RS485 data, DMX or mic applications. Fine Oxygen Free strands, low capacitance insulation, precise lay-up, anti-microphony fillers and a tough jacket make for a handleable yet low-noise cable. Because 100-percent shielding is required, a combination of tape and braid is used. This construction works well with the recently introduced Neutrik digital XLR connectors, which offer 50 times better EMC screening and can be used for electronically hazardous environments and digital audio to AES3.

The FibreCast expanded beam tactical fiber system from Fibreco is designed for use in the OB field and offers 1-channel to 4-channel configurations.

In the last few years, 270Mb/s SDI video coaxials have largely superseded the BBC PSF 1/3M because of their high velocity of propagation, low attenuation and considerable associated space savings in MCR and OB applications.

The current installed base of BNCs for analog video will largely be the 50 V type. The quarter wavelength of digital video, however, is around 1500 times smaller than analog, so reflections caused by BNC connectors in the digital chain will affect return loss and attenuation. Return loss is not just down to cables. Impedance mismatches from unsuitable connectors and patch bays can lead to signal reflections at high frequencies, so the use of 75 V BNCs becomes crucial.

Outside the USA, the de-facto standard for video patching was the 50 V MUSA connector. For digital signals, new 75 V, 1-piece machined-center conductor designs have arrived that maintain backward-compatibility to existing MUSA products.

Basic Fourier analysis of a square-wave signal shows that, in the frequency domain of SDI, the fundamental plus the odd harmonics are used to regenerate the signal (for example, +0.333f3 +0.2f5 +0.14f7 + …). A standard rule of thumb is that for reasonable signal fidelity, the fundamental plus the harmonics up to the 7th are included in the pass-band.

A large established user base in studio and OB installations means that triaxial cables remain the most widely specified.

Despite a lack of HDTV transmission to the home across Europe, the high-resolution capture of television programs in digital, especially of sports events, greatly improves sound and picture quality. SMPTE has developed a specification SMPTE 311 for high- definition camera cables. A composite cable with two optical fibers for video, two/four power cores and two control/sound conductors, it enables reliable signal transmission in a relatively small, lightweight cable construction.

Fiber usage is increasing and offers great benefit in terms of bandwidth and higher transmission distances. Optical dispersion (effectively attenuation) reduces as bandwidth increases, so with multimode fibers, there is a move back to OM3, high-bandwidth 50/125-micron for high-frequency transmission.

Fiber-optic connectors must maintain alignment during repeated mating cycles, and coupling loss can easily result from misalignment, poor end preparation, mismatched fibers and Fresnel reflection. Tyco has a patented crimping technology for its LightCrimp Plus connectors that makes optical termination a simple mechanical process — without the use of adhesives, polishers or curing processes. The mating faces of the connectors are factory-polished and contain internal index matching gel to cut down dispersion and offer field-terminable performance on a par with standard epoxy connectors.

In the OB field, fully sealed, ruggedized hermaphroditic expanded beam connectors such as the Fibreco FibreCast system offer 1- to 4-channel configurations using rugged, deployable MIL Spec (U.S. military specification) cables that are far better suited to the rigors of riggers. These connectors use lenses to first expand the light substantially beyond the diameter of the fiber itself, and then refocus the light from the incoming fiber to the receiving fiber. The optical interfaces are protected by what amount to glass windows and, hence, if coated with water, dust or mud, are easier to clean without causing damage. Designed for 2000 matings minimum, they require no maintenance.

USB devices can transfer data at up to 12Mb/s, almost 50 times faster than serial connections, and are increasingly used in the broadcast sector in audio and even digital speakers and microphones. However, within digital post, FireWire is the interface of choice. FireWire is a high-speed serial input/output technology for connecting digital devices such as camcorders and cameras to desktop and portable computers. Fire-Wire enables patching at 400Mb/s bandwidth — more than 30 times faster than USB.

In 1994, the BBC R&D Department published a paper at the AES International Convention entitled “Twisted-pair cables for AES/EBU Digital Audio Signals.” It concluded that Cat 5 shielded twisted audio pairs offered the highest performance of a range tested, including coax and cables specifically designed for digital audio. Cat 5 was preferred for its flexibility, consistent performance and use for mixed data applications.

It started a trend resulting in a new range of RJ45-type connectors, including the Neutrik Ethercon ruggedized Cat 5e connectors, as well as back-to-back panel socket versions. In the OB sector, this led to the military-style RJ45, based on a MIL-C 26482 bayonet connector body. The connector shell retrofits to a preterminated cable, while the panel connector is a bulkhead back-to-back RJ45 unit. The cable used with them is a Cat 6 over sheathed with a rugged PE jacket to resist abrasion, water and trucks running over them.

The AES/EBU 110 V +/-20-percent impedance specification is undoubtedly accelerating the use of unshielded twisted pair (UTP) cables in the convergence of broadcast and computer/control systems. The latest Cat 6 UTP types can achieve a -30dB common mode balance. Consequently, they are capable not only of transmitting Gigabit Ethernet, but also multimedia.

New-generation insulations such as foamed HD Polyethylenes offer low capacitance with the necessary crush resistance to avoid capacitance change. However, while Cat 6 offers an available bandwidth of 200MHz — twice that of Cat 5e — and the RJ45 connectors may look alike, at 100MHz, the near-end crosstalk (NEXT) of an average Cat 5e connector is 43dB, whereas that of a Cat 6 is 54dB. So a Cat 6 connector couples only about an eighth of the noise, pair to pair, than that coupled by a Cat 5e connector.

Digital signals are in principle more resistant to interference than analog, and broadcasters can maximize their bandwidth or satellite capacity through digital compression and multiplexing.

As audio and video VCRs and playout carts are increasingly replaced with hard disk server devices, multimedia signals are likely to share the same building infrastructure data wiring as other services. This may still be in its infancy in copper terms, as the 100-meter link length of Cat 6 is arguably not a match for coax, but better compression and frame rate techniques will lead to more applications such as streaming media becoming commonplace. Then, the higher bandwidth that Cat 6 and fiber offer will generate smarter hardware and software in a self-perpetuating circle.