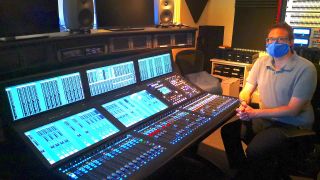 WATERTOWN, Mass.—When NESN moved out of Boston’s Fenway Park and into a 40,000-plus-square-foot. Building in Watertown, Mass. 14 years ago we became the first regional sports network to broadcast every single Red Sox and Bruins NHL game in HD.

Along with the move to HD, we also began to lay the foundation to transition to 5.1 audio by purchasing two 32-fader Solid State Logic C100 digital broadcast mixing consoles, one for each of the two new studios.

Two years ago, we decided to replace the C100s with the intention of adopting a Dante audio-over-IP infrastructure and eventually move to AES67. We felt moving NESN’s core audio infrastructure on a Dante network would be beneficial because hundreds of manufacturers and products support Dante, offering a high level of integration going into the future.

We were also looking for a console that could handle live pre- and post-game productions in our studios, as well as live game programming. Plus, the mixing platform needed to integrate tightly with our Ross OverDrive automation and Evertz EMR router. SSL’s System T broadcast platform met all of our requirements, so in February 2019, we commissioned twin System T S500 consoles with 48-fader control surfaces, each with redundant Tempest processing engines, together with a number of SSL’s Network I/O interfaces.

In our facility, the System T consoles manage more than 300 active inputs—a mix of native Dante, analog, AES, SMPTE ST 2110 and SDI-based sources. Operators can switch between different layers on the 48-fader surfaces—for instance, one layer could be the pregame setup, which flips with the press of a button to the game programming build. The Tempest T80 Engine has an 800-path capacity, and we are nowhere near maxing that out. We are now using close to 400 paths after adding an extra control room and integrating more Dante-enabled peripherals to handle added productions during the COVID-19 pandemic.

Dante integration is key to the flexibility that System T has brought to NESN’s operations. In a traditional audio infrastructure, physical cables are needed for each individual signal path. With Dante, the individual cables are not necessary as long as all the devices are connected to the same network; audio signals could be made available everywhere and anywhere inside NESN and at remote sites. This made the entire process for NESN engineering and the audio engineers to implement and support new audio consoles much easier.

EASY PATH TO SET UP

A1 and NESN engineering now support all the network audio controls to all edge devices without getting involved in physical point-to-point infrastructure for each edge device. If we need more I/O we just plug in a suitable Dante device and it’s instantly available everywhere on the network. We can add any device from any control room, studio or master control. Yet there is a layer of protection that prevents one console from taking a route from the other, so you can never inadvertently affect the setup in the control room next door.

Even though the new T platform has been designed from scratch with a new OS, our A1s required minimal time to get up to speed on the new system. The control interface is very flexible—some of our operators prefer to use the touchscreens, others prefer the hardware panels. We also utilize the SOLSA (SSL On/Offline Setup Application) software, which can access console routing and resources we can’t control from, say, Ross OverDrive.

The rapid development of consumer television and audio devices over the last decade has expanded the range of listening experiences. NESN’s move to next-generation audio-capable devices fits our roadmap to stay ahead of the curve and enhance the home viewers’ viewing and listening experiences.

Fahad Haider serves as CTO and vice president of engineering at New England Sports Network. He has led efforts to implement new strategies to enhance operations, production, engineering and transmission workflows and efficiencies utilizing established and emerging products. He can be contacted at sports@nesn.com.