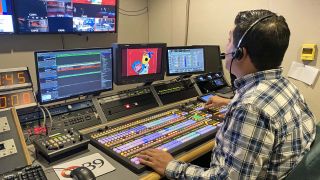 The HVS-2000 switcher was equipped with 32 inputs—which can be expanded to 48—and a 3 M/E panel with 6 M/E performance, plus 4 MELite buses. It also has AUX remote control panels to feed set monitors.

A typical WLVT-TV production consists of a four-camera shoot, but some shoots can use up to 10 cameras, both studio and PTZ, which the HVS-2000 is able to handle.

A new function provided by the For-A gear is that operators can load and playback graphics from the ClassX with the HVS-2000, making them available during live productions. The ClassX supports the use of RSS feeds for updating election results and other data in graphics, as this new equipment will assist with the station’s coverage of the presidential election in November.