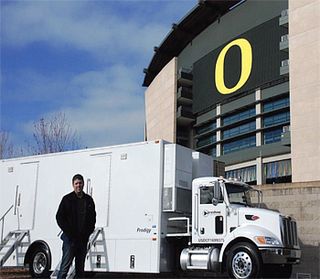 Tim Lewis
EUGENE, ORE.
When you're charged with providing OB truck technology for the top-ranked Oregon Ducks, you have to be as nimble and creative as the players on the field.

At Proshow, a Western Canada-based provider of broadcast mobiles, flypacks, and corporate audiovisual services, we've built OB trucks for sporting and a variety of events on both sides of the border, including CFL and NCAA football, NHL, AHL and WHL hockey.

We were contracted by Graystone Media of Portland, Ore. to provide mobile facilities for the Oregon Sports Network (OSN) broadcast coverage of the Oregon Ducks football games for the 2010 season. Graystone produces the games for OSN and they're carried on cable throughout this part of the country. We used "Prodigy," our compact 27-foot HD video production truck to originate television coverage of these games.

Football in Oregon is serious business, and the American sports community and national broadcasters are watching every play, especially in a year when the Ducks made a run for the national championship. Prodigy was built to handle exactly this type of coverage.

In our game coverage, we regularly shared the broadcast compound with the big guys like ABC and ESPN, but handled our own preshow and post show production, as well as provide a fully independent HD broadcast of the game itself. Of course, our producers always wanted every possible camera angle, so extensive cross-patching from the other major HD mobile production units was commonplace.

On top of this, we were responsible for providing numerous feeds to the production trailer handling all of the SD in-house video, known as "Duckvision." When you combine that with about six different HD and SD VTR and DDR formats in the client's workflow, we knew that we had to be ready to convert anything to anything.

This assortment of converters has worked perfectly. We use the up/down/cross units for HD-to-SD downconversion for monitoring paths. HDMI to SDI is used to convert consumer HD "clock cameras" to SDI. And we use the SDI-to-analog converters to feed our portable video monitors. Our audio/SDI units serve as extra embedders and de-embedders for all the VTRs, and the SDI-to-fiber converters are perfect for the long transmission runs that only optical fiber can handle.

We've built a seamless broadcast workflow with the Blackmagic converters that allows us to handle an event or stadium of any size. Most importantly, this technology has allowed us to work effectively with our clients and producers and to handle every format that they can throw at us.

Tim Lewis is the president and founder of ProShow. He may be contacted at timlewis@proshow.com.

For additional information, contact Blackmagic Design at 408-954-0500 or visit www.blackmagic-design.com.