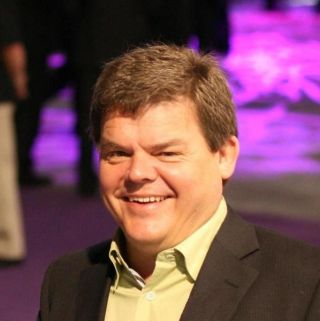 Graham Sharp, chief marketing officer at Grass Valley, said he remembers the days in the early 1990’s when video editing went nonlinear and virtually overnight everyone was taking advantage of the inherent benefits. It literally changed the business by making video editor’s lives easier and allowed them to work faster. Nonlinear editing soon penetrated the news production environment and transformed it as well.

At this year’s 2012 NAB Show, in April, Grass Valley is taking that same concept and looking to apply it to live production; where teams of people have to capture an event and then produce content for a variety of platforms simultaneously, yet they still do things in isolated silos, the way they have for 30 years.

“Live Production is the last bastion of the linear way of producing content,” Sharp said. “We still call server operators ‘Tape ops,’ which is a term that’s been around for a long while.”

To successfully migrate to a nonlinear workflow, a fully networked production environment has to be established on site that allows a single cohesive method of collaborative working that can be tightly integrated with a remote production site. Like the early days of nonlinear editing, today’s editors and other production staff could randomly pick and choose different audio, video and graphics elements, manipulate them as required, and then move them along the content creation chain.

“Live content is still the most valuable to content owners and distributors, so we’re trying to give production companies the tools to get they need the most value out of that live event,” Sharp said. “Previously, productions staff would be segmented and the team would throw a different crew at each delivery platform. This is expensive and a duplication of tasks. Why not give one crew access to everything they need and the ability to do it faster and more efficiently than they ever could before? To us, that means an integrated platform that addresses specific tasks all along the chain.”

That integrated platform is the Grass Valley Stratus media workflow application framework, a software-centric suite of tools that provide the right s tools for the task and nothing more. If you work in ingest, that’s the only software module you’ll be using (or have access to). The platform was formally introduced last year by Grass Valley continue to upgrade its capabilities with new software modules. That’s the beauty of software-centric products.

Among the latest enhancements to Stratus is new automated rules-based file operations and Edius XS, a low-resolution proxy editor that shares most of the effects capability of Grass Valley’s established Edius real-time HD system while streamlining the workflow by allowing more parts of the production to be performed by (less costly) off-the-shelf edit workstations.

Discussing the system at a press briefing, Sharp said Stratus is not a media asset management system (MAM) and went so far as to say that enterprise-level MAMs had lost favor with a lot of broadcasters that had implemented some form of it and then were disappointed with the results. While MAM can be part of a Stratus deployment, Stratus takes media management to a whole new level. Audio and video clips are easier to find and are routed immediately the people that need them most.

What Stratus is, however, is central to Grass Valley’s new product strategy of software-enabled production tools that are flexible and can be utilized for different projects on different days. This strategy is being leveraged across the company’s cameras, production switchers and other piece of technology that have traditionally been delivered as fixed format, hardware-based solutions.

“We’re freeing creative people to take charge and not worry too much about the technology, per se,” Sharp said. “We’re extracting the technology layer and making all of our platforms format agnostic. And we’re saying that multiplatform distribution starts at acquisition.”

Many broadcast equipment companies are migrating their product lines to embrace the advantages of inexpensive IT systems and specialized software that can do the job of previously expensive dedicated hardware solutions. Today’s real value, for customers and manufactures alike, lies in software.

“As processing power continues to increase, more and more hardware will be commoditized," Tim Thorsteinson, Grass Valley’s new CEO, said. "But the software we develop is where our value is today.” We are uniquely positioned to make difference in this industry and that’s what we plan to do.”

It’s nonlinear thinking, for sure, to bring production teams closer together and allow them to do more by collaboratively focusing their efforts and reducing redundant steps in the overall workflow. Like the early pioneers of nonlinear editing before them (Avid Technology, for one) Grass Valley just might be on to something.