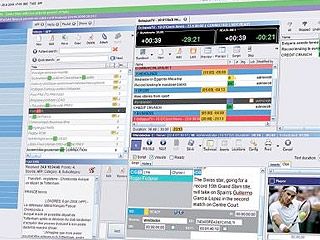 Earlier this year an OCTOPUS6 system was installed at public broadcaster WGBH in Boston. This was followed by installations for Root Sports network in Denver, Seattle and Pittsburgh. Octopus Newsroom has more than 100 installations worldwide including many major networks such as Euronews in France, Radio Free Europe, Czech TV and Turkish Radio and Television.

With a user-friendly interface that runs natively on Windows or Mac OS X, OCTOPUS6 supports the MOS protocol, which enables integration with the most appropriate playout automation, graphics systems and prompters for your environment. In addition to all the core newsroom functionality, OCTOPUS6 includes: a built in MIS to monitor newsroom productivity; iPad clients as a replacement for printed scripts for presenters; Android/iPhone apps for sending stories in from the field with video/audio/photo attachments; and Social Media Integration, including forward searches that query Twitter in real time.

The company said it will sell the system for a one-time payment and its licensing system is purely based on concurrent client connections. So users can avoid annual license payments.

OCTOPUS6 can also be seen at the Editshare stand (1236), where Editshare will be showing OCTOPUS6 software as a fully integrated part of the Editshare Geevs news production and playout solution.