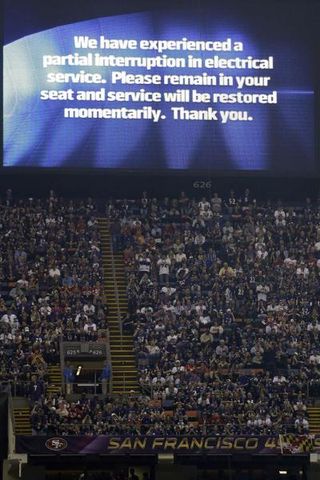 The biggest game of the year, and perhaps the highest rated single live televised sporting event in the U.S.—that is, Super Bowl XLVII—was put on pause for 34 minutes due to a power outage that stadium officials said was caused by an “abnormality” in the power system that triggered an automatic shutdown, forcing backup systems to kick in. But still no one is sure what caused the problem. Just don't blame the TV production crews that were hard at work.

Auxiliary power kept the playing field from going totally dark, but escalators stopped working, credit-card machines shut down, and the concourses were only illuminated by small banks of lights tied in to emergency service.

The Baltimore Ravens were leading the San Francisco 49ers 28-6 when most of the lights in the 73,000-seat Mercedes-Benz Superdome in New Orleans went out with 13:22 left in the third quarter Sunday night (Feb 3). The unprecedented (for a Super Bowl) power failure delayed the game by more than 30 minutes. The Ravens eventually won 35-28, however the blackout resulted in a huge momentum swing for the 49ers.]

Remarkably, the actual CBS broadcast was only partially affected, with Jennifer Sabatelle, vice president of communications for CBS Sports, telling the Associated Press that the crews lost numerous cameras and some audio powered by sources in the Superdome, but that backup power was immediately deployed and at no time did the coverage go off air.

Once the game resumed, CBS said all commercial commitments for the broadcast were honored. The network sold out its allotment of advertising at $3.8 million per 30-second spot.

NEP Supershooter’s “SS24” HD mobile production truck was parked outside the Mercedes-Benz Superdome in New Orleans and provided the main game feed. It was not adversely affected, due to its own generators, and was able to continue to use the onboard Sony MVS-8000 production switcher to keep CBS talent on the air. Game announcers Jim Nance and Phil Simms lost power to their press box, as did the entire press corp. level.

Entergy New Orleans, which provides power to the stadium, and Superdome operator SMG released a joint statement reporting that the problem started at the spot where Entergy feeds power into the stadium's lines. The problem occurred shortly after Beyonce put on a halftime show that featured extravagant lighting and video effects.

"A piece of equipment that is designed to monitor electrical load sensed an abnormality in the system," the statement said. "Once the issue was detected, the sensing equipment operated as designed and opened a breaker, causing power to be partially cut to the Superdome in order to isolate the issue. ... Entergy and SMG will continue to investigate the root cause of the abnormality."

In all my years of watching Super Bowl telecasts I have never seen a blackout occur inside a stadium (it’s happened in the regular season several times) during a game. At least my streak of 35 straight Super Bowls in which the TV production itself did not fail, remains intact.

Kudos to the production guys in the trenches for keeping a steady hand on the wheel and not panicking when things went dark. F&F Productions (Florida) and Game Creek Video (Hudson, N.H.) also had trucks on hand for their parts of the festivities and none of their efforts were negatively affected.