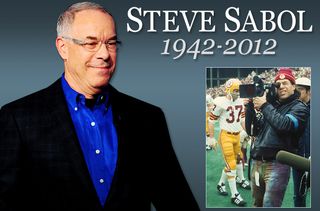 I met Steve Sabol on November 8, 1998, on the football field at Giants Stadium in New Jersey. I was there to write a story about Sony’s new HD cameras, which were being used to shoot the first American football game—between my New York Jets and the Buffalo Bills (the Jets won). It was broadcast in HD on CBS to a limited number of compatible televisions in the market at that time.

I remember walking up to Sabol, who was conferring with one of his camera operators that was using a 16mm film camera. I joked with him that HD was here to stay and would replace film for sports coverage. He quickly responded by stating that NFL Films’ only desire was to capture the action in the highest quality. He didn't care what type of camera was used. Sabol said NFL Films would continue to shoot on film, because they were interested in preserving the images for the future, as his father had taught him to do. He was thinking repurposing and future copyrights, which have since made NFL Films wildly successful.

Today I am struck by all of the media accounts of his death this week and talk of his “vision” that literally changed the way we all watch football. The up-close-and-personal perspective was his trademark (perhaps borrowed from Roone Arledge at ABC Sports) and it carried through to everything that the NFL Films did. It was all about telling a compelling story about the game at hand. He said NFL Films goal was to “nurture not only the game's traditions but to develop its mythology: America’s Team, The Catch, The Frozen Tundra.”

Sabol’s father Ed started the business in 1964—after first acquiring the rights to shoot the 1962 NFL championship game—but Steve, after working as a cinematographer right for his father, evolved and expanded it without ever losing sight of that initial vision of high quality storytelling.

''We see the game as art as much as sport,'' Steve Sabol told The Associated Press before his father was inducted into the Pro Football Hall of Fame last year. He also received the Pete Rozelle Award, presented each year to someone who made an outstanding contribution to professional football. In 2007, the Hall of Fame also honored him with the Dan Reeves Pioneer Award.

Steve Sabol died on Tuesday, September 18 after a bout with cancer, at age 69. He was diagnosed with a tumor on the left side of his brain after being hospitalized for a seizure in March 2011. He was clearly the creative genius—in terms of the use of technology—behind the remarkable work of NFL Films. Steve was one of the first to put wireless microphones on players. He also made heavy use of reverse angles and slow motion for dramatic effect.

"Today of course those techniques are so common it's hard to imagine just how radical they once were," the younger Sabol told the Associated Press last year. "Believe me, it wasn't always easy getting people to accept them, but I think it was worth the effort."

NFL Commissioner Roger Goodell said “Steve’s passion for football was matched by his incredible talent and energy. Steve's legacy will be part of the NFL forever. He was a major contributor to the success of the NFL, a man who changed the way we look at football and sports, and a great friend.”

In 2003 both Steve and Ed Sabol were awarded a Lifetime Achievement Emmy from the National Academy of Television Arts and Sciences. In his career, Steve Sabol won 35 Emmys for writing, cinematography, editing, directing and producing.

I still remember that November day when I was being smug and Steve was extolling the virtues of film in the face of the emergence of (1080i) HDTV. I thought then that NFL Films would have to change with the times. Well, today NFL Films still shoots its specials on film (although all of the game highlights processed by NFL Films are now shot with a video camera) and Steve’s legacy will endure forever.