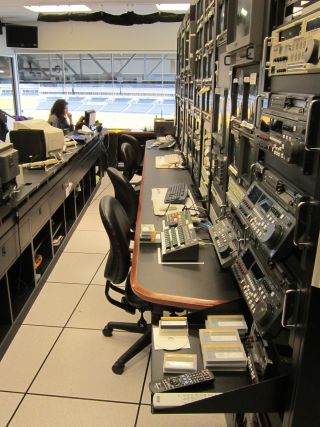 As engineers experienced in designing today’s broadcast facilities, we are careful to coordinate every detail of design as it relates to the architecture of sports and entertainment facilities. Every aspect is analyzed to ensure the fan experience is optimized. It’s important because there are thousands of screaming fans in your stadium, but there are also millions of passionate fans watching on television. We take extreme care when designing the physical space.

Likewise, broadcast designers have a critical role in maximizing the viewing experience for those around the world. It’s also important to design a facility with the onsite broadcast needs in mind. Backed by our experience at large-scale venues, we share three common mistakes that can be avoided with thoughtful engagement by your broadcast design professionals.

Have all the critical termination locations in your facility been determined? Has your broadcast designer considered the conduit pathways between all of these locations? If they haven’t, then you may end up with inadequate camera support or communication challenges for the TV production crew. Review of these cabling runs will also help eliminate unnecessary cabling or incorrect cable types – saving your client significant amounts of money and eliminating huge headaches for production crews when it’s time to go live!

Broadcast design professionals should properly specify their pre-wire and backbone cabling systems. If not, your stadium crews could be forced to run unsightly bundles along the floor, over the roof, or through occupied spaces for each event. Getting this right is vital.

Technology is adapting. Ask your broadcast professionals if the cabling specified is going to provide proper infrastructure — not only on opening day — but for the future technology that’s on its way.

An experienced broadcast designer will know the rules of camera placement by heart and follows the industry guidelines closely when laying out a facility. Failure to adhere to these rules could prevent the broadcast crew from capturing that game-changing moment or key replay angle. Here are some examples:

A broadcast designer well-versed in league rules and regulations is an architect’s best partner when it comes to early stadium and venue planning. Camera placement is a well-informed art and a crucial factor in quality TV production.

When it comes to event venues, everyone wants the best seat in the house. The midfield seats, center field plaza, club, and suite level locations are not only the highest revenue generators but are also the best location for a broadcast booth. A common myth in the industry is that the broadcast production crew and control rooms also need to be positioned at the center field suite level.

Here’s the inside knowledge your experienced broadcast designer should bring to the table:

You may get recommendations from some in-house venue engineers to place the control room alongside the broadcast booth. While we don’t argue it’s a scenic location to go to work every day, it’s not necessary. A quality broadcast designer will apply best practices by keeping the whole organization in mind.

Avoiding these three common mistakes in broadcast design will help you deliver a thoughtful installation for your venue clients and help provide an awesome viewing experience to the people that matter most — the fans.

Michael Tran is a senior broadcast designer for Henderson Engineers with nearly 30 years of industry experience. He has worked in venues around the country served as both a design consultant and broadcast engineer for networks such as Fox Sports and the NFL Network.

Brent Felten is an associate and lead program/project manager for Henderson’s broadcast services team. He started his career in stadium and arena design nearly 15 years ago. Since then, he has covered a broad range of practices with a proven track record of growth across all market sectors.