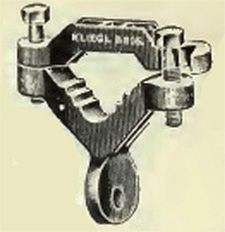 The technical world associated with the entertainment lighting industry has become very complex and sophisticated. The digital control revolution has made the seemingly impossible, realizable. However, this article will not be about universes, visualization or RDM. Let's just say that it is about nuts and bolts.

This may come as a shock to the reader, but the truth is the core of a lighting design is not with the technology but with the effect of the choice and application of the lighting instruments. It should be apparent that the true essential of a good design is instrument placement.

Fig. 1: Pipe clamp circa 1922 In talking about positioning, I would like to pursue a subject so basic that initially you may consider it trivial. We are going to concern ourselves with the simple mounting of lighting instruments that have a flat yoke with a hole in the top of an inverted "U," which is meant to attach the traditional North American theatrical pipe clamp.

The clamp's purpose is to attach the yoke to a pipe, a pipe whose typical outside diameter is about two inches. I will not address the slightly more demanding assemblies necessary to support, say, the weight of a high-performance moving light or other elegant (and more costly) clamp designs.

The typical pipe clamp probably evolved very early in theatre lighting, some place in time after the limelight and before the olivette fixture. A catalog from 1922 shows an early attempt (Fig. 1). It would appear that to mount the clamp (with the fixture attached), the electrician would have to support the full weight of the light prior to swinging the top piece of the clamp into position.

I would venture a guess that this inconvenience resulted in the development of the more common version (Fig. 2). It is this current version I would like to address with a big "why?" It has one particular design characteristic that I believe is an invitation to a disaster.

The top section's lower surface is flat and does not hook onto pipe. If you place your fixture on a pipe using this clamp, and walk away for a moment to discuss world events without tightening down the screw into pipe, the unit will take that opportunity to crash onto the deck.

The story of why this surface does not engage the pipe more directly was told to me by a show business old-timer.

Fig. 2: Common theatrical flat yoke pipe clamp Broadway theatrical shows (and their road companies) most always perform in houses that do not have a permanently installed lighting system. Before the revolutionary concept of multi-conductor cable, bundles of cables (pre-cut to length) were required, one cable per circuit from instrument to dimmer boards. These were tied on the top of each electric pipe, making quite a large bundle as circuits were gathered on the way to the dimmer boards.

Usually on the "in," the lamps were mounted on the pipe prior to the cable bundles. The big problem came when a lamp had to be moved or added to already tightly bundled pipe. The flat top of the pipe clamp allowed this to be done much more easily; to limit the amount, the bundle had to be raised to make an opening to insert the pipe clamp on the pipe. Lore or not, let's accept this reasoning.

Along the way it became apparent that rotation of the lamp yoke would actually loosen (or tighten) if the bolt were directly attached to the clamp; hence, a spindle was added with a small cap screw providing a means of locking it from rotation. The main bolt holding the lamp's flat yoke now attached to the spindle, and, no longer required for lamp rotation, could be tightened and held with a lock washer. (In the real world, the lock washer gets lost somewhere.)

Of course, vertical motion is provided as part of the attachment of the yoke to the body of the fixture itself. Aiming the lamp could be more positive and accurate.

Fig. 3: State-of-the-art flat yoke pipe clamp. Adapter by Mole-Richarson, MUT “Handle” by TMB Associates. I think by this time you get the idea. So let's just go ahead and describe a nearly perfect state-of-the-art solution, without knowledge of TCP/IP, but maybe a little common sense—a pipe clamp that represents more than 75 years of accumulated experience. While we are at it, we might as well include the requirement that the clamp in normal use will not require the use of an adjustable wrench or any tool.

Fig. 3 is the culmination of all our work. Let's review its features. First of all, and probably most importantly, it has a hooked upper mounting surface to satisfy my previous objection. A very convenient "TEE" handle has been included to loosen for horizontal aiming and then tighten without the use of a tool. Finally, a handle (named rather appropriately "The Handle") has been captured on the bolt that tightens the clamp to the pipe, again with no tool.

Note that this particular clamp has an added feature—a radial ball-bearing to smooth the panning adjustment. The flat yoke is attached to the spindle as before using the standard half-inch bolt fitted (I hope) with proper washers to ensure that it cannot loosen and rotate. Please use a tool here that has some mechanical advantage.

A BIT OF PHILOSOPHY

As I mentioned at the outset, it would be easy to imply that our subject is trivial. However, I think there is a bigger, more general lesson to be learned here. It is quite proper to question deeply embedded practices; there could be a hidden or overlooked, more efficient and elegant way waiting to be discovered. A simple pipe clamp shows us it is never too late.

Bill Klages would like to extend an invitation to all the lighting people out there to give him your thoughts at billklages@roadrunner.com.