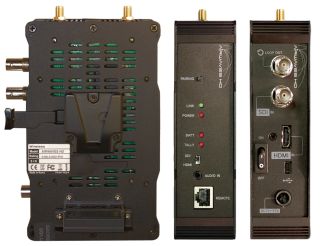 Oxygen DCT has launched AirWaves HD, a wireless HD monitoring system that gives directors and producers working on set or on location the freedom to monitor productions without being tethered to cables.

Launched in direct response to huge demand from television and film companies, AirWaves HD comprises a camera mounted transmitter and monitor mounted receiver that stream HD-SDI and HDMI signals wirelessly over the air, up to distances of 1500ft (500m) away. Video is throughput at a maximized data rate to produce uninterrupted high-quality HD video with low latency and impressive resolution. Embedded audio and timecode are also carried transparently across the air waves making Airwaves HD exceptionally versatile. AirWaves HD is equally suited to field and studio production and is supported by a host of options specifically tailored to indoor and outdoor use.

Small, lightweight and highly portable, the AirWaves HD system eliminates the need for tethered cable connection between cameras and production monitors, allowing far greater mobility of equipment, as well as reducing on-location set up time. A single push button initiates the pairing and automatic connection of the transmitter and receiver. The multiformat system handles full bandwidth 3G-SDI, HD-SDI, SD-SDI and HDMI video signals up to 1080p60 4:2:2.

The AirWaves HD transmitter works with all makes of HD cameras and has an optional V Lock adaptor plate that allows it to be clipped on to the back of a camera and powered via the V Lock plate from V Lock equipped batteries. Whilst accepting power as low as 7VDC, these devices have been designed to work with equally state of the art power systems including the latest high-power 26VDC battery systems used with Arri Alexa cameras.

The receiver can also be fitted with an optional V Lock adaptor plate, allowing it to be clipped onto any monitor equipped with the same facility, such as the Evolution P3 range of LCD and OLED monitors from Oxygen DCT. This enables producers and director to monitor their productions with great mobility and without having to worry about cables.

AirWaves HD offers a choice of two transmitters and two receivers, a HDMI only version and a HDMI and HD-SDI version, which may be mixed together in the most suitable combination for production requirements. AirWaves HD also employs the latest MIMO antenna technology that gives improved communication performance by allowing extended link range without increasing bandwidth or power consumption and a latency of just 20ms. Whilst the standard AirWaves HD operates up to 450ft (150m), distances of up to 1500ft meters can easily be achieved using optional high-gain antenna and AirWaves HD can also safely be used in any location as it doesn’t require special FCC licenses.