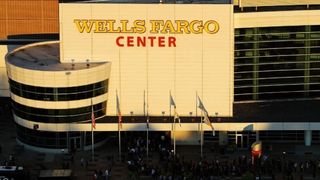 Comcast-Spectacor, the parent company of the Philadelphia Flyers and owner of the Wells Fargo Center, announced a new partnership with IMT’s Nucomm CamPac2 camera-mounted transmitter and Newscaster DR2 diversity receiver to provide the nearly 20,000 Flyers faithful fans with an incredible game-day experience.

The CamPac2 wireless camera system is compact and simple to use, yet sophisticated enough to handle a wide range of applications, including ENG, portable camera mounting for sports production, helicopter and UAV links, as well as portable, mobile video and data links.

The facility wanted to make sure that the most passionate and loyal fans in all of professional sports in-house experience as enjoyable as possible. Nucomm’s wireless camera system allows the Flyers to shoot incredible pictures all over the Wells Fargo Center, something never before thought possible. Signal coverage is complete, from the last row of the upper bowl to the concourse and ice level. Not having to worry about signal loss or picture freeze gives producers and operators to focus their full attention on the fan experience.

The system is being used by a hand-held camera operator primarily for fan shots, shots of arena hosts working with fans during sponsored activities, and during breaks for on-ice or on-court activities,

The CP2 is a tri-band-capable unit that operates in the unlicensed 5.8GHz band, as well as the licensed 6.4GHz and 7.1GHz bands, without the need for any hardware changes.

The Newscaster DR2 diversity receiver is an updated model of its industry-leading predecessor, the Newscaster DR. It offers new features, including “intelligent” block downconverters, which actually communicate to the DR2 receiver, and the ability to control various operating modes. By using the ability to block downconvert the received high-frequency signals to UHF band signals in the 150MHz to 850MHz range, the DR2 now has the ability to extend its antennas remotely up to 1000ft (using Belden 1694A cable), complete with DC power from the receiver, as well as other versatile modes of operation.