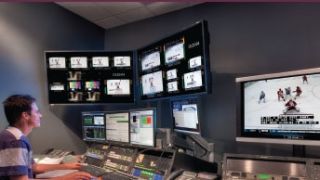 In late 2011, Comcast Media Center (CMC) launched the new NHL Network program origination operation in Comcast's Dry Creek facility. The NHL looked to employ the latest technologies and practices to enhance the on-screen experience and overall quality of its broadcast. It turned to the CMC to provide scheduled and live-event origination as well as distribution services.

In the facility, two MCRs are located immediately adjacent to each other within a short distance of the CMC central equipment room. The control rooms each include full-featured systems that offer advanced control over dynamic scheduling, as well as on-screen contribution elements.

The addition of a multi-protocol label switching (MPLS) terrestrial fiber network connects nearly all of the North American hockey arenas to both the NHL studio operations and CMC via terrestrial fiber, yielding significant inbound feed capacity.