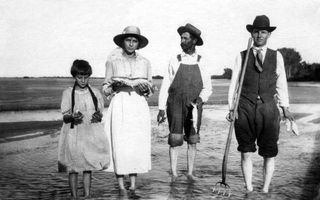 SCANT: Everybody’s all “oooh digital this, and mobile that” but where’s the money for content creators? How do they get paid in a world where people refuse to pay for content? Advertising, right? Except the ad dollars aren’t going to the content creators or the companies that support them. They’re going to Facebook. The Pew Research Center says Facebook will corner 20 percent of all online display ad revenue within three years. What’s up with that?

I never look at ads on Facebook. Ever. I do not link to things that make me download a “reader” app or join something. Clearly enough people do to make advertisers swoon, but how many people just hit OK out of frustration of being delayed? Probably quite a few, just to find themselves inundated with solicitations for whatever that click was related to. This is where advertisers are pouring bucks—to tap dance on the fragile boundary of privacy? OK, I jest. We all know there is no such boundary online, and this is where advertisers want to be. Inside your head. Go ahead and mention your headache and behold the pharmacological deluge.

And let’s be clear. If I owned beaucoup shares of Bayer AG, I’d want them to be within 60 seconds of every headache there is. Advertisers can’t be blamed for flocking to a medium where people are broadcasting their autobiographies 24 hours a day. TV and newspapers once ruled the advertising realm because they reliably had the most eyeballs in their respective markets. Now, there’s a global platform where advertisers can pretty much glean more personal information than can the CIA. But to what end? Online advertising is still cheaper by far than TV or print.

So how is it that those mediums are sucking proverbial wind? Pew this week came out with data that indicated audiences grew for local TV news last year even as revenues declined. Scooby snack? The medium is the message. The audience increase was attributed to greater consumption on mobile devices. So even though the audience for local TV news is expanding because of mobile consumption, those news teams aren’t being supported by it because a third-party app, portal or service provider is making the money. Gosh.

There are reasons aplenty. Broadcasters can’t get on the same page with mobile DTV. There’s that. Apps and access platforms are multiplying like rabbits. And there’s a tipping-point issue.

While digital typically represents the “fastest growing” revenue segment for TV stations and most other traditional media companies, it’s still wee compared to their primary platforms. TV station digital revenues reached $536 million last year, up 19 percent from 2010, when the total was $450 million—still just 2 percent of the primary platform. Over-the-air revenues were $19.4 billion for TV stations in 2010, according to our friends at BIA/Kelsey.

TV station digital revenues aren’t even expected to breach $1 billion until 2016. That’s a significant sum in my household budget, but still a fraction of the TV station total. So they’ll continue to focus on the primary platform rather than risk disproportionate investment online. However, the judicious approach could mean greater risk in the long term, because TV stations are getting such a small chunk of all local online revenues, which now exceed total over-the-air local revenues and are expected to account for one-quarter of total local ad spending in 2016. TV stations are on track to get less than 3 percent of that, while over-the-air revenues are projected to be flat.

“TV stations for the most part have only in the last three to four years have only become serious about playing in the online game. It will take some time for them to catch up proportionally... Some are thinking, some are trying new things. They may seem haphazard. Some things work. Sometimes the advertiser themselves don’t even know what they want.”

I think of Mick Jagger singing “American girls want everything in the world you can possibly imagine,” which Jagger could afford because he recorded most of his catalog before file-sharing. Everyone else in a content creation business who does not move like Jagger or own a significant chunk of Facebook will be financially compromised until they take control of their digital revenues.

One would think newspapers would be the last place to seek out a strategy, but when casting for survival methods, it’s wise to observe the dying. Nearly everyone scoffed at pay walls when newspapers started throwing them up online. Yet one year after implementing its pay wall, The New York Times has half-a-million monthly online subscribers. That’s not too shabby, and something for TV stations to consider with regard to third-party service providers, and for all content creation businesses to keep an eye on.

Because the bills do not pay themselves.