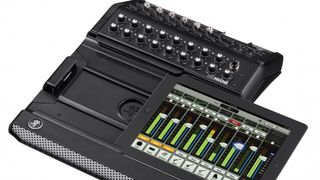 I’ve been a big Mackie fan since they released the original CR-1604 mixer back in the day. In fact, I bought two of the first run. Before the 1604 came along, even the most modest home studio had to plunk down over 4k for a 16-channel console.

Times change, and competition (some of which Mackie challenged in court) came nipping, but the fundamental concept of the 1604 has withstood the test of time. Engineers tracking live shows who are iPad aficionados would do well to follow this link and check out Mackie’s new DL1608 mixer.

Considering the facts that it piggybacks on to an iPad and a Wi-Fi router is required (Mackie recommends the Airport Extreme), the DL1608’s four-figure price tag does not qualify, in my judgment, as a bargain. The hardware looks good, however, as Mackie used the same 24-bit Cirrus Logic AD/DA converters with 114dB dynamic range (A-weighted), operating at 48kHz, that are offered in the Blackbir and Onyx-i series boards. Also, all 16 XLR inputs offer +48V phantom power.