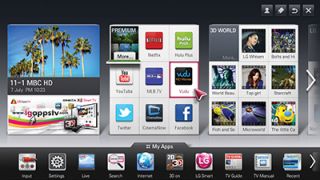 By January, the first stage of this “trigger” process may be elevated to “candidate standard” status at the Advanced Television System Committee, with a view toward summer adoption of the technical plan.

Integrated triggers would prompt smart TV sets to display content-related details, such as story-line information or star backgrounds, and, more significantly, advertiser enhancements, such as local dealers and promotional details.

But there are hurdles, including predictable challenges from the cable TV industry, which may opt not to retransmit the embedded triggers, and possibly from advocacy groups that don’t want to re-allocate some of the digital bandwidth reserved for closed captioning, which is where the envisioned triggers would ride. Moreover, some broadcasters and program producers may object to the clutter on the primary big screen that the triggers could create.

As a Consumer Electronics Association executive stated, right now, “We’re just trying to make it work.” He points out that it’s not clear if the software in all smart TV sets can be updated to handle the trigger directives, noting that many manufacturers use proprietary systems for enhanced content displays.

At the center of the “trigger” plan is the opportunity for broadcasters to insert a tiny data stream into their digital signals. When that data hits a smart TV, it would trigger an app to pop up on the screen, providing enhanced information similar to what is now available via third-party services on a tablet or smartphone being used by two-screen viewers. The data would ride in an underused portion of the 3D closed-captioning segment, as defined in the Consumer Electronics Association’s 708-D standard.

LG Electronics smart TV user interface “The key element is that broadcasters [deliver data] to cause things to happen on the viewer’s TV set,” explained Rich Chernock, chief science officer at Triveni Digital and chair of the ATSC’s Technology & Standards Group (TG1), which is developing the trigger plan. Through testing, the ATSC group has found that the triggers will work on new 3D TV receivers and will be “backward compatible” so that older digital TV sets “wouldn’t get confused.”

“Since the captions are carried within the video stream, you want them to be tightly bound, to go wherever the video goes,” Chernock said. “We came up with an extension of the 708 [standard] for 3D. By design, these triggers are very small, under 100 bytes.

“It’s a very convenient way to carry data. It will make it through a lot of distribution systems since it’s part of the video,” he said.

The signals could trigger an Internetconnected smart TV (now about 40 percent of the TV market) to recognize a “Triggered Downloadable Object” (TDO), Chernock explained. The TDO resembles Java Script, HTML and other Internet coding, and tells the receiver “to put things on any screen,” he added.

“When we first started this, the notion of second-screen viewing [on tablets or smartphones] hadn’t picked up,” said Chernock. He insists that the goal of the plan is to “allow broadcasters to keep control” of the total viewing experience.

Another factor, of course, is how to allow smart TV viewers to avoid such intrusions into their viewing. The ATSC plan is expected to include a feature that allows a viewer to override or eliminate the on-screen inserts if they choose to do so.

Among the challenges to ATSC’s plan is the reality that “a lot of people see TV without a broadcaster feed or with data stripped out,” Chernock acknowledged. His committee is addressing the barrier via technologies such as Automated Content Recognition (ACR), which senses that triggers are in the video stream through digital fingerprinting or watermarking technology. He believes fingerprints are the most likely solution.

“Once you build that infrastructure, you can do anything you could do with triggers in the signal,” Chernock said. “Broadcasters can cover their bases by feeding triggers and also installing ACR systems” to deliver total video plus enhancements on one screen.

TRIALS, PROTOTYPES, PROMOTION
ATSC hopes to distribute a first ballot for the trigger candidate standard within the coming month. A prototype and trials will take place during spring.

“There’s a lot of drive behind this, and it will probably be pretty quick,” Chernock predicted.

Future discussions will include labeling, so that buyers of smart TV sets that have the storage capacity to handle such services will know about their single-screen multidelivery options.

While the ATSC plan is aggressive, similar— but non-compatible—trigger initiatives are underway via the “Hybridcast” venture in Japan and “Hybrid Broadcast Broadband TV” (HbbTV) in Europe.

ATSC President Mark Richer agrees with Chernock’s view that these broadcast triggers are ripe for a global approach and that use of core technologies, such as apps and browsers, will generate economies of scale.

One of the goals of such plans is to let program producers and advertisers author once and then use their enhanced content on multiple platforms, including broadcast delivery.

“There are a number of things we’re bundling together, including triggers, advance video coding and non-real-time standards to download content files as well as linear TV,” Richer said. He pointed out that the triggers could enable a smart TV “to go out to find something on the Internet or drill down into specific content.”

Richer, who also chairs the new Future of Broadcast TV international alliance, said that ATSC plans to organize a working group to develop an implementation strategy for trigger technology. He expects the group will include broadcasters and consumer electronics makers, emphasizing that the current developments are part of the ATSC 2.0 project.

One objective is to pull together technologies such as the data triggers in the 2.0 version, and then move it over to the future ATSC 3.0 platform as that takes shape in 2014. Richer expects that the future ATSC 3.0 version will be more closely integrated with the global “Future of Broadcast TV” activities.

Hence, the upcoming development of TV trigger technology can become part of a larger, potentially global, venture into broadcast interactivity.