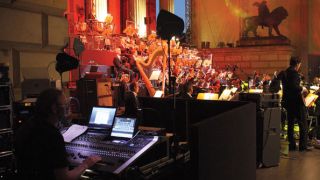 Recording sound for television presents a number of challenges. One goal is intelligible speech, and this calls for good separation between the voice and background noise. In free space, sound intensity falls off according to the inverse square law, so positioning the microphone close to the source is vital. For genres like drama, microphones and their cables should not be visible, and this demand can conflict with the need to get microphones close to their sound source.

Heard, but not seen

The primary means of recording is the boom microphone, which is close to but out of the shot. This requires a skilled operator who can work closely with the cameraman. Concealed microphones can also be used, covered by clothing or hidden in props. For most genres, they should be discrete, which means sub-miniature and wireless.

This need to avoid the microphone being overtly visible or not visible at all inevitably leads to compromise. Equalization in the desk can hopefully compensate for sub-optimal microphone positioning. Other tools, including special dialog noise-reduction filters, can also assist in the capture of clear dialog. Clip-on microphones usually come with a rising frequency response that improves treble response. This counteracts the loss of high frequencies when the microphone is hidden underneath a costume.

Recent advances have focused on wireless as live events become more complex. Wireless frees talent from trailing cables, but available spectrum is shrinking as mobile service providers buy up capacity in bands traditionally used for wireless microphones. Consumer technology is advancing, and developments such as surround sound have added to audio capture’s complexity.

The director of a live event will want the sound designer to capture a setting’s excitement and add it to the drama. It is no longer adequate to have a crossed pair of microphones capture crowd ambience, and a lip or headset microphone for a commentator.

Sound design for sports production is an integral part of the TV experience, and even more so in surround. Sound is used to capture the excitement of the crowd, helping to deliver the director’s concept of sport as compelling TV entertainment. Audio must also capture action, and that means microphones must be close to the play. Digital technology is being used in new areas to help sound designers. One development is digital wireless, while another is the digital microphone.

Early wireless microphone technology has been based on FM over VHF or UHF. Multiple antennas give diversity reception to avoid dead spots in the radio transmission, but, just like FM radio, the system is prone to interference. To give a good audio dynamic range, the systems used companding — dynamic range compression in the transmitter, with complementary expansion in the receiver. Such a method is not without artifacts, however, and some music styles suffer especially; jazz is one example.

For large events where many microphones were used, frequency planning was once complex because of the needed increase of available slots, and also the hassle of avoiding issues like intermodulation between channels.

Newer digital technology allows a higher audio quality, with systems offering an uncompressed audio path. This potentially delivers a dynamic range in excess of 110dB. But, digital processing is not without its pitfalls. Digital systems can “fall off a cliff” when the received signal drops below a threshold. The analog FM systems degrade more gracefully. In the presence of a low signal or excessive multipath reception, the signal-to-noise ratio decreases, but audio remains.

Digital systems need careful design to avoid the cliff effect. RF propagation on set is plagued with multipath effects as well as obstacles to the line-of-sight transmission. This needs intelligent diversity reception along with error concealment to avoid audible distortions. As a last resort, gentle muting can fade a lost signal.

So, although a digital system can potentially offer clean, uncompressed audio, the data and RF components must incorporate clever processing to avoid what could be some very nasty clicks and dropouts. Many popular error concealment techniques have long latencies, which make them unacceptable for a microphone circuit. Processing should not introduce latency over 10ms in order to avoid problems with fold-back to artists.

Analog systems are more forgiving, but have audio performance drawbacks, like companding and noise. The next generation of wireless systems that use digital technology promise a new level of fidelity close to a wired connection. However, digital systems need sophisticated technologies to operate reliably within the propagation conditions typically found on the set or at the venue.

Although television drama started in the studio much like film (since the 1970s), the trend has been for productions to shoot on location. For interior shots, the presence of a ceiling makes it more difficult to use booms. Rooms have four walls, not the three of a set, and this adds up to problems of deploying booms. Nevertheless, these productions often use a mix of shotgun microphones with personal wireless microphones for the main actors, using a discrete clip mic and a concealed body pack. This is easier with period drama, where wardrobe fashions allow more opportunities to conceal a transmitter.

In small rooms with hard-surface acoustics, a boom microphone may pick up too much of the room’s acoustic and amplify the natural resonances. The short distance of a clip microphone from the mouth helps to capture clearer speech. For drama, wireless microphones offer an alternative where the use of a boom or fishpole is not an option.

Wireless microphones find application across genres from drama to live performance. Whatever the limitations of spectrum, they form an essential part of a sound recordist’s tools.

Wireless technology has its limits, especially if a large number of microphones are needed. And, in many circumstances, wired microphones do not present a rigging issue. It is not a problem to use fixed microphones, or for cables to be in view when micing a band or orchestra. They are as much a part of the set as the music stands.

Interference from radar on the flight deck of an aircraft carrier can be avoided with digital microphones.

For outside broadcasts, there are physical problems conflicting with the demands of the director. There is weather with which to contend. Also, cable runs can be very long. Cable from a microphone suspended from a stadium roof or concert hall running out to a truck can be hundreds of meters.

Long runs from analog microphones have always been susceptible to induced noise, with the classic interference source being cables from dimmers to stage lighting. Another source of interference is fluorescent lighting. One partial solution is star-quad cable, but it still doesn’t avoid high-frequency roll-off from cable capacitance for long runs. RF interference can also be an issue, with input stages of a mixer demodulating cellphone signals and other radio sources in the vicinity.

The first part in the signal chain of a digital sound desk is the A-to-D converter (ADC). To avoid losses in low-level microphone cables and miss the issues of induced noise, the ADC can be moved to a stage box closer to the microphone. This avoids the need to run analog signals over long multi-pair snakes from stage to truck.

This principle can be taken further, placing the ADC within the microphone body. The digital microphone has been around for a few years now, but lack of support from all but a handful of desk manufacturers has restricted widespread use.

Digital microphones comply with the AES-42 standard. This defines a digital interconnect similar to AES-3, but also adds support for remote control and digital phantom power (DPP). The power is applied as a common-mode signal as analog 48V phantom, but uses 10V at up to 250mA. Data transport is similar to AES-3, nominally 4V p-p. The remote control to the microphone is added to the DPP, and can be used to set gain and attenuation along with directivity pattern, with functionality varying between manufacturers.

There are several desks and portable mixers now that do support AES-42. The alternative is to use an AES-42 stage box to convert to AES-3 and then use a conventional desk. Stage boxes also provide a computer interface for remote control of microphone parameters.

AES-42 can typically be deployed at runs up to 300m with 110Ω cable at 48kHz sampling, depending on cable quality much as AES-3 cable runs. Longer cable lengths may be used with care in cable selection and possible receiver equalization or the use of active repeaters, or both. There is also the issue of voltage drop for the DPP. An alternative is to use a stage box to convert to a format that can be carried over optical fiber. Then, the cable run lengths can be kilometers without issue.

As an example, the U.S. Open of Surfing, in Huntington Beach, CA, is a large event, held on a beach stretching 300m. Unlike a stadium event, where fiber and cable runs are pre-rigged, a beach presents a hostile, wet and salty environment. This year, Coffey Sound used digital microphones to capture the sound of the ocean as well as the audience. Coffey’s sound designer, Gary Vahling, rigged spaced microphones for stereo ambience, as well as spot microphones for the crowd. The cable run to the truck was 300m, with an AES-42 interface connecting the digital microphones to the mixing desk. Vahling found that the fully digital path gave a more detailed sound with virtually no hiss or noise to contend with. Using the remote control facility, Vahling could tweak the microphone settings from the truck.

Digital microphones also are finding use within stadiums. Sound mixer Jonathan Freed, who has captured ambient sound at venues for major U.S. networks for decades, is using digital microphones as part of his toolkit. To capture surround sound in a football stadium, he uses four microphones in an “X” configuration, delivering a 4.0 sound field. With the center channel used for announcers, 4.0 works well with 5-channel surround.

Freed’s microphones may have a run of 300m back to the truck, but digital microphones allow him to capture stadium ambience with the least possible distortion and best possible accuracy, with an absence of hum and noise, and improved dynamics.

For all but short runs, the stage box is the norm. These usually link via fiber back to the desk. The new generation of stage boxes adds support for AES-42 microphones, including the DPP. Digital stage boxes are available from portable boxes to interface a single microphone to AES-3 format, to multichannel boxes that link together to interface tens of microphones for complex recording events.

Some sound desks now incorporate full support for AES-42, including remote control of microphone parameters. Sound mixers now have complete flexibility to place the ADC in the microphone, the stage box or the console. Stage boxes can be linked to the console using Ethernet over Cat5, Cat6 or optical fiber.

From drama to sports, directors are looking for more exciting audio to accompany HD pictures. Microphones must capture the subtle nuances of sound with great fidelity, yet be discrete or invisible. The microphone output should be transmitted free of distortion and noise to the sound desk.

Digital microphones and digital wireless are two technologies that are helping to faithfully deliver signals from the capsule back to the desk.