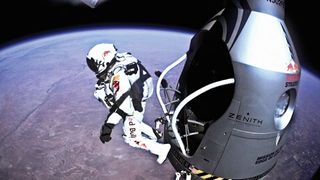 While remotely controlled cameras and widely dispersed intercom communications have played a key role for different types of production and live broadcast applications for many years, due to their ability to cover areas not possible or impractical for a human, none to date has reached the heights of the system developed to document, in real time, the world’s record for a freefall skydive and, it turns out, the first human to break the sound barrier.

In October of 2012, Felix Baumgartner’s skydive from the edge of space captivated millions of viewers as they watched nervously via the Internet and other IP-connected devices as he stepped off his flying platform and plunged to Earth. Baumgartner, a highly experienced extreme base jumper and skydiver, ascended to 24 miles (39 kilometer) in a stratospheric balloon that lasted about two hours and then fell 121,100 ft. in four minutes and 20 seconds.

“Sometimes we have to get really high to see how small we are,” Baumgartner told reporters immediately after the jump.

Throughout the Red Bull-endorsed record-breaking jump from some 24 miles up, where Baumgartnerreached a free fall speed of mach 1, the mission control ground crew was able to stay in touch with him and share his experience with the world.

That’s because several technical teams at Riedel Communications, based in Germany, worked closely with Baumgartner and his team in the U.S. and elsewhere during a series of test skydives over a three-year period prior to the historic leap. In fact, Riedel provided most of the technology used for the audio/video-transport system—including both wireless and wired digital intercom systems—mounted inside the Red Bull Stratos capsulethat carried Baumgartner into the stratosphere, as well as the entire communications infrastructure for the Red Bull Stratos project.

Riedel system engineers also designed and supplied fiber-based video and signal distribution and wireless video links that allowed the captivating pictures from the capsule’s onboard cameras to be transmitted back to the ground with very low latency (the signal is coded and decoded for the wireless transport, which naturally causes some latency in the video by the time it reached Earth).

Matthias Leister, head of broadcast solutions at Riedel Communications, said his team outfitted a small pressure housing (about the size of a full beer keg) inside the capsule with enough equipment to satisfy a medium-size mobile production truck. This turned out to be a major challenge as size and weight restrictions limited them in a number of technical areas.

Riedel engineers developed the software that allowed mission control to switch any of the nine HD cameras to any of the three video downlinks, allowing mission control operators on the ground to remotely trigger (start and stop) Panasonic P2 recorders inside the capsule, as well as adjust color balance, gain, and shutter control on the cameras.

A single dual-digital radio link was employed to control all of the video downlinks from the capsule, Leister said, which allowed them, in the event of RF interference, to switch to another frequency and continue controlling a particular device. Switching so many different devices and brands from different manufacturers proved to be a major challenge in and of itself.

Ground Control Brings It All Together

The communications infrastructure on-site included the entire compound, the mission control, the production offices, the media/press center, an HD edit suite and a mobile production truck (Lyon Video’s “MU-8”) used as the main A/V control room. All these facilities and positions were networked together into a single communications infrastructure via a Riedel Artist Digital Matrix system.

Riedel also provided an on-site digital radio network with more than 100 radio receivers and ten channels, which were seamlessly integrated into the wired matrix intercom system. This allowed radio users to directly talk to intercom users and vice versa.The company also supplied the radio system housed inside Baumgartner’s chest pack and used to communicate live during the freefall.

Riedel’s Leister said that the free-fall radio system inside Baumgartner’s chest pack was not as powerful and could not transmit a signal to Earth as well as the one radio system inside the capsule because they could not use a large enough battery system (due to weight and bad aerodynamics). Instead they used steerable antennas on the tracking trucks and relayed the signal via a TV tower in the nearby town of Caprock, NM. That tower relayed the signal between mission control and the tracking truck.

Fiber-Based Networking In A Ring

Once the video signals reached the ground they were immediately routed with Riedel’s MediorNet fiber-based network technology. Two dozen MediorNet nodes were installed in a redundant ring topology across the compound to ensure reliability. In case of a potential connection loss between two nodes, the signals would have still been distributed due to the redundant topology. There could be no second chances to get it right.

The two-way connection to the launchpad of the capsule was also accomplished with the MediorNet system, with two MediorNet Compact frames connected to the main system. All links in the MediorNet system were tied together with Riedel’s PURE cable, a tactical fiber cable for demanding mobile applications that is equipped with professional-duty Neutrik OpticalCON Quad connectors.

The MediorNet backbone transported all video signals of the Red Bull Stratos mission as well as all signals from the production truck and from two FlightLine optical tracking trucksused to monitor the in-flight capsule. Riedel networking technology was also used to distribute intercom panels and IP-based broadcast audio signals between Mission Control and an off-site recording facility and for the transfer of telemetry data featured on several broadcast applications (such as a Moving Map that documented Baumgartner’s fall and his speed and oxygen levels).

In addition to the video transport the MediorNet technology also served as a network backbone for the on-site intercom installation and the Internet connection, providing Ethernet connectivity to all areas of the ground-based compound.

The live feed of the Roswell, NM jump, reportedly drawing a record 8 million concurrent streams on YouTube and airing on more than 80 TV outlets in 50 countries, was produced by Red Bull Media House. Once Baumgartner landed safely on the ground, after reaching a peak speed of 833.9 mph (or 1.24 times the speed of sound), the technical feat—switching so many different devices and brands from different manufacturers through a single system—was said to be equally rewarding.