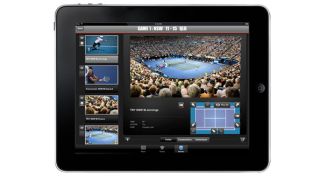 Television viewers no longer limit themselves to a single screen. Instead, today's audiences multitask over Twitter, Facebook and other social media sites as they consume their media. Rather than risk losing those viewers, broadcasters can now provide original premium content to consumers via their second screens, including camera angles and highlights not seen in primary broadcasts. With the proper tools, the large amount of content on servers that is often wasted and unused can be monetized and delivered in near real time to viewers' connected devices.

The EVS C-Cast provides a set of integrated tools to support the development of content for these new screens in any live EVS multicamera production infrastructure, such as in OB facilities and TV studios. Delivering the additional content to viewers on second-screen media platforms relies on the descriptive metadata associated with event footage.

The system creates a second-screen timeline of events being produced into which external elements — such as ads, stats or surveys — can be inserted, enabling a high degree of interactivity and facilitating cause-and-effect programming. With an open architecture based on APIs, broadcasters can build their own Web application interfaces and charge subscribers for the service, and/or have sponsorship and merchandising on the consumer application.

The integrated engine suite is designed to make any multicamera content, as well as archives, highlights or third-party content, instantly available to Web-connected devices. The system is not an application, but rather the intelligence behind it, allowing customers to generate exclusive content on their own application interface. (See Figure 1.)

Any clips or highlights created during live productions can be made instantly available to Web app subscribers. The company's synchronized multicamera-angle recording allows the system to automatically process unseen footage or any clip created on the company's servers for these other screens. During live operations, descriptive metadata as well as third-party stats can be integrated into the system database and associated with video clips and highlights, which are made available to the user in near real time.

EVS’ C-Cast system makes any clips or highlights created during live productions instantly available to Web app subscribers. The company’s synchronized multicamera-angle recording allows the system to automatically process unseen footage or any clip created on the company’s servers for these other screens.

The complete workflow is composed of standard equipment, including XT/XS series servers and IPDirector.

Installed at a production venue (OB van, studio or broadcast site), the C-Cast Agent server connects to the network, retrieves content and transfers it to C-Cast Central.

Installed at a datacenter and managed by the broadcaster, C-Cast Central assembles the content from one or several C-Cast Agent servers. It manages content, ensures delivery and directs availability via APIs. C-Cast Central is scalable to unlimited productions and applications, and includes the administration back office, CDN management, content syndication management and an API for second-screen applications. A viewer application manages viewers' interactions on their devices. Both the viewer application and the Web server are usually provided by a Web service provider but can be supplied by EVS in a project management mode.

More than 70 percent of tablet owners now watch sports on their TV sets while simultaneously consulting their Web-connected device as a second screen. C-Cast enables broadcasters to take advantage of this social media engagement in ways that mean increased revenue opportunities.