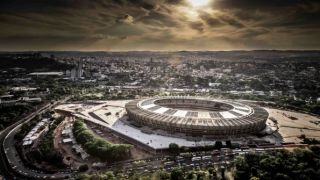 The lines that once divided theatrical, home and live entertainment venues are eroding. Poor-often unintelligible-audio pumped through sports stadiums met little resistance from fans in the past. Today’s sophisticated enthusiast is demanding a higher level of performance.

Nowhere is this demand greater than in the hugely popular sport of soccer. Brazil’s Mineirão Stadium can handle crowds of more than 62,000 people. Mangers of the 50-year-old arena hired Walters-Storyk Design Group/Brazil (WSDG) to overhaul its entire audio system. Work on the project has just been completed, according to Renato Cipriano, a partner at WSDG/Brazil.

“Our primary facility management concerns focused on the level of sound comfort and intelligibility in relation to the RT60 reverberation time required to meet stipulated FIFA STI mandates,” Cipriano says. “Our simulation programs enabled us to assess and ‘auralize’ the entire complex. We identified extensive sound reflections throughout the arena and concluded that acoustical absorption be installed at the inner ring of the audience sector to achieve the required STI values.

Speaker positioning was defined for the internal and external areas, and for numerous zoning maps, which can now be individually controlled for increased flexibility and security purposes. All specific audio and video systems, and control-room speaker selections, were designed to meet FIFA requirements. Additionally, we recommended incorporating a video wall instead of a traditional scoreboard,” he adds.