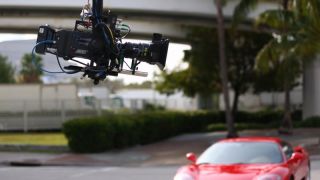 It’s about to get hotter in Miami. Tonight is the long awaited match-up between Notre Dame and Alabama for the BCS National Championship title. Bluefoot Entertainment, based in West Hartford, CT partnered with ESPN to uncover the city of Miami by bringing the famous, and not so famous, places and faces of this iconic city to life. From Little Havana to Calle Ocho, to Versailles and Joe's Stone Crab restaurants, game viewers will experience the heart of the city, the way only Bluefoot Entertainment can showcase.

“Miami is so much more than South Beach,” says Bluefoot founder, Timothy Horgan, who directed and edited the Miami shoot. “Once you get off the tourist lined beaches, you find an amazingly large and diverse city. It really is a microcosm of America. There are so many little gems that are scattered around the city. With the help of ESPN’s Wright Thompson’s scripts, we were able to bring some of these “local” favorites to life.”

Bluefoot collaborated with ESPN on more than 20 Miami video essays, airing throughout the Bowl Championship Series, to give viewers a real sense of place for the city of Miami. In addition, Bluefoot produced and edited “Miami,” the Opening Sequence for both ESPN's January 7th College GameDay show and the 8:30pm Championship game. Bluefoot also produced and edited the “#GAMETIME” sequence featuring hip hop artist Pitbull, which airs minutes before kickoff.

The BCS Championship game airs on Monday January 7th at 8:30pm on ESPN.

Bluefoot Entertainment, located in West Hartford, Conn., is an Emmy Award winning television and film production company specializing in all aspects of high-end production and post production. Bluefoot combines decades of television experience with cutting-edge technology to create high-end, high definition productions. As a leader in the industry, Bluefoot partners with producers, directors and directors of photography through every stage of production. Bluefoot provides its clients with a wide variety of services including on-site research, directing, editing, voice-over and narration, script writing, package design, duplication, online distribution and marketing.For more information about Bluefoot, please call (860) 236-4504 or visit www.bluefoot.tv