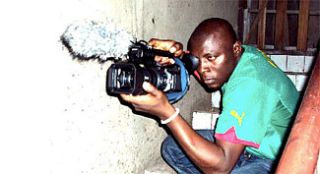 Family: I am a family man with a daughter.

Where did you grow up?
In Cameroon but I moved to South Africa at the age of twenty, where I lived for about nine years.

Where do you live today?
In Douala, the economic capital of Cameroon.

Training:
I got into university to study sociology and anthropology, but was swept away by a love for arts and adventure. I’ve had no formal training but at seven I started my ‘film company’ by selling illustrated story books to other pupils at school. I called them ‘film books’. Even then I could understand different shot values, depth of field, and direct the characters in my different stories.

I won the Guinness Fine Arts award at nine and kept filmmaking alive until I discovered cameras and all that comes with them. My training in cinematography started when I appeared as talent in local and International TV commercials shot in South Africa and got to know many directors and film crews.

What benefit do you think your studies have given you in your working life?
I understand different situations better and it’s easier to direct the people I work with both in the office and on set. My informal training now helps me to see issues from different angles.

Have you been busy?
Very busy. Being a filmmaker and creative head of an advertising agency, it can’t be anything less. My camera is constantly rolling for clients and I make time to share my experiences with other filmmakers around me.

Have you faced any difficulties, cultural or governmental, when shooting in Africa?
The main difficulty in projects is financial. The movie industry in Cameroon is a bit slow and having funds to shoot even the best projects is so difficult that many young filmmakers here are frustrated and have no hopes to achieve what they would like to.

In 2005, while shooting a production in Cameroon, I was dragged into a police station by curious policemen who had seen me when I walked past their station. They wanted to see what was in my big bags and delayed my production for a whole hour, just to see documents of my equipment, as filmmaking was strange to them.

Another time, I wanted to shoot a film based on a military story. I had hoped the military would see the film as an opportunity to showcase its military might and for them to communicate with the civilian public. However despite my efforts at the military HQ, I was never given permission to shoot.

I was even warned not to make the movie. I hope to reopen negotiations later.

Do you specialise in a particular genre?
I’ve shot more TV commercials and short films than feature projects, but my passion is to do more action, horror, and passionate, true life-inspired stories and documentaries.

Most recent, interesting assignments?
Besides the commercials, I constantly work at different levels. My most recent project is a feature-length musical drama, based on the power in positive thinking and emerging from poverty, unemployment, and HIV.

Current camera equipment you use?
My current Camera is a Sony PD 170, but I’m working towards acquiring a Canon 5D Mark II package with all the essentials.

Kit ‘wish list’?
My wish would be to have a RED One camera, the best lenses and filters plus every accessory to go with it. And a sophisticated editing suite.

What useful piece of gear do you wish someone might make?
An affordable digital camera that shoots 100%, undisputable, tested and proven film quality and not the near-film quality of many HD cameras.

Best thing about your job?
The best thing about my job is to see an idea take form, then transform it into something that comes to life after shooting. It gives me more joy if the team I work with is enthusiastic about the project. When I did my award-winning short film, Retribution, I had very limited time to work on the project – just two days to shoot, since it had to be screened at a local festival and we were late. We shot round the clock without rest and little sleep for two days and the film won the Grand Prix of the awards.

Worst thing about your job?
The worst thing is the slow, timid, and doubtful attitude towards the cinema or audio visual industry of my country. I’ve faced situations where I’ve worked for years to put together a project, but just at the final moment with a local investor, they tell me they’re not sure.

Dullest assignments and why?
My dullest assignment was a feature film called Discovery, which I did in South Africa around 2004. I worked with a very authoritative but uncreative producer who allowed no creative freedom. We constantly fought on set and I threatened to quit the production twice. Worst of all, my payment was hijacked by armed gunmen 15 minutes after I got paid. They hijacked me at gunpoint as I pulled up in front of my Cape Town residence.

Hairiest/scariest assignments and why?
The scariest assignment was a project I was supposed to go and do somewhere around the Congos. It was supposed to be a kind of documentary and a foreign producer contacted me to be the cameraman of the project and their French speaker. The briefings and research showed we were going to be travelling by road around territories still known for bloody rebel attacks, voodoo warriors doing a kind of fight to the death, underground traditional wrestling and so on.

There was a great deal of risk in the project and I would have done it but unfortunately the payment did not justify the dangers of the assignment.

What country do you most like to shoot in?
I love to shoot in Cameroon because it has fantastic undiscovered locations. The people are hospitable and always ready to make film sets so lively. South Africa too has some very interesting locations and there you can find a wider range of equipment and experts in different fields to work with.

Favourite food?
My favourite food will be ‘fufu and eru’, a traditional meal from my native land of Nchang in Mamfe, in the South West region of Cameroon.