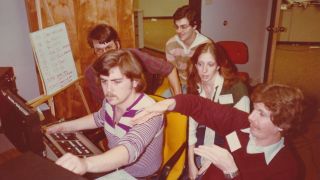 More than 40 years ago, Ted Turner began gathering resources to create a 24 hour all-news channel. We all know it today as CNN, but it was called the Cable News Network as the June 1, 1980, launch date approached.

In 1979 Turner sued the three network news operations at CBS, ABC and where I worked, NBC. The suit was for unfair practices that excluded this new fangled cable news organization from providing “pool coverage” of major events, particularly when covering the White House. It was unanimous among the three newsrooms that these “kids” could never handle the responsibility.

The networks settled in early 1980, months before Turner launched the network. Each network agreed to assign one or two experienced people to the Atlanta operation to teach them the technical requirements that would support CNN personnel acting as “pool,” allowing them to become part of the network pool coverage rotation. From NBC News, Guy Pepper and I were assigned to this task. Guy was in the studio and control room, and I was to train what was originally called the “Video Journalists” or VJ’s in field shooting, sound and editing. Keep in mind this is in the middle of the 1980 presidential campaign.

WHAT’S THE WORST THAT COULD HAPPEN?

Turner had hired Jim Kitchell from NBC News months earlier, with Jim’s high level of experience and knowledge lending credibility to Turner’s plan. I had been with NBC about 15 months and had just completed five weeks in Bogota covering the Dominican Embassy siege (and just before the Mariel boatlift) when Jim called. He knew that years earlier, when I was 20, I had transitioned WFLA from 16mm film to videotape, including training the photographers and reporters, and that I’d be a good choice for training CNN. Tom Wolzien “discovered” me at WFLA in autumn 1978 and orchestrated my move to NBC’s Dallas Bureau in January of 1979 to work with Bob Dotson. Tom is the founder and CEO of The Video Call Center.

Being only 22 at the time was a buffer to the senior execs at NBC, Bill Small and others—“we sent that kid from Dallas,” kind of thing. What harm could he do?

The 15 “students” came from across the country, some had already worked in commercial television and some were straight out of college. As their “adjunct professor” and being the youngest one in the room, I didn’t have much time to assess the experience levels among them like I did at WFLA.

Included in that first group are a couple of people who have found success within media, only at higher levels. Among them, Keith Brunson produced “Scary Movie” in 1991 (not the spoof comedy of the same name), Meade Jorgensen has been a Dateline producer at NBC for 25 years, Ron Dean is a cameraman at “60 Minutes,” Derwin Johnson was Mid-East Bureau Chief at CNN and ABC and is now a crisis management consultant. And then there’s Phil Griffin who is now president of MSNBC.

Most had casual experience with videotape, and few if any had ever seen the Sony BVU-200 decks Turner had bought. These are the top loading 3/4-inch U-Matic decks that have four handles on them for a reason. They required a separate edit controller, the BVE-500A, which included a search knob instead of the buttons on the BVE-500. You could shuttle through videotape and see picture at a whopping 2x speed.

I started them off with editing, and then in subsequent visits we covered shooting and sound. Logging was the first day, being able to use timecode references to quickly find elements. We taught “time of day” timecode because a producer could note a soundbite at 13:20:15 when shooting a press conference, and when editing or feeding you didn’t have to shuttle at 2x to find it, you could get closer with TC notes. TC notes are, wait for it… “metadata”—continuing the tradition of working that word into my essays.

Turner bought the “Beast” for the camera, RCA TK-76. NBC News was the only one of the three major networks at the time to use these because, primarily, RCA owned NBC and we had to use their cameras. It wasn’t until Tom Wolzien’s successor at NBC, Jeff Meadows, that the first Ikegami HL-79’s were purchased, around 1985. The TK-76 was the camera I ordered and used at WFLA because I wanted NBC to know we were "compatible" and wanted them to ultimately rescue me, which they did. ABC and CBS used Ikegami.

The technology that impressed me the most during my experiences training these VJ’s was the Sony BVU-110 field deck. You needed a sound technician to carry this recorder, which was heavier than the BVU-50 (record only) deck that a strong camera person at a local station could carry on the left shoulder with the “Beast” on the right shoulder.

The BVU-110 did an amazing thing that the smaller, lighter BVU-50 also did: back-space edit. The predecessor, BVU-100, didn’t do this, making only marginal edits when the camera trigger stopped and then started again, even with the required Timebase Corrector. You would avoid slapping a tape from a BVU-100 into a deck and playing it directly to air. And the BVU-100 only played back in black & white—you needed a separate device to play back in color.

With back-space edits, the 50 and 110 backed the tape a fraction of a second when the camera trigger was pushed to stop. The next time you started, the heads and transport would come up to speed and precisely start the recording at the frame exactly after the last frame recorded. You could air a tape directly from the BVU-110, of course with a timebase corrector. And it played back in color with no other devices.

My “second” experience as an adjunct professor training the first VJ’s at CNN was rewarding at many levels. I continued teaching and "transitioning" technology to news photographers and editors while at Avid and then Apple years later, moving them off videotape and onto nonlinear editing, and of course "capturing" to disk with Editcam—celebrating its 25 year anniversary this year (had there been an NAB this year).

It’s hard to believe 40 years have passed since "CNN College."

The BVU-110 back-space edit capability gave me an opportunity at NBC to create and test a small battery-powered edit pack consisting of two of these portable decks. My essay on Field Editing commemorates the day in January 1981 when I edited a package on a Lear Jet flying back from San Salvador to meet our Nightly News deadline feed from the Miami Bureau—and not flying around Cuba, but over it. The “Audio Dub” feature allowed me to record the correspondent narration onto channel 1 once we landed. Now we can do all of this on our phones, all of it—shoot, edit, transmit and go live. It’s been an amazing 40 years.

All images and content ©2020 Joe Torelli. Joe can be reached at joe@torelliconsulting.com. As an established Subject Matter Expert in editing and Media Asset Management (MAM), Torelli continues his consulting practice providing clients with experience across the gamut of acquisition and editing platforms providing expertise in managing mass amounts of media for delivery of finished programs.