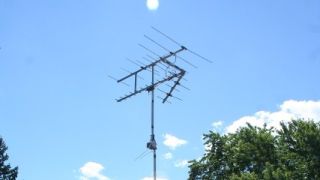 TV receive antennas are one of the most popular topics based on the number of emails I receive from readers. Many times they will request additional information on antennas I wrote about years ago—the Gray-Hoverman covered in 2008 or the high gain wire rhombic I covered in 2006.

Meanwhile, I often learn new things from readers. Bill Robbins, an over-the-air TV viewer in Florida, was concerned about reception from his antenna setup. I’ve found trying to align or adjust a TV antenna using the “quality” indicator on a TV set or the signal level on a meter is difficult, slow and doesn’t always find the best orientation. A spectrum analyzer is a better choice.

Fortunately, these no longer cost thousands of dollars. I recommended Robbins pick up an Airspy SDR and use its free Spectrum Spy software to look at the spectrum of the incoming signals, aligning the antenna for best level and best flatness (least multipath) on the desired channels. He bought an Airspy R2 and sent me a screenshot of the final result. It looked good. He’s using a Winegard LNA-200 (one I’ve also found to work well) and RG-11 coax from the antenna to his in-home distribution setup. However, I’d never heard of the TV antenna he was using—the HD-Stacker. So when he asked my opinion I looked into it and found it quite interesting.

In some markets there are a mix of UHF and VHF stations—mostly high-VHF (7–13)—but post-repack, sometimes low VHF (2–6) as well. Unfortunately, the last time I looked, the most common option for people needing high gain at VHF was a monstrous low-VHF through UHF antenna that was as big as a Volkswagon. You know the ones: They have low VHF elements in the back, followed by high VHF elements, followed by a long UHF section.

The HD-Stacker has elements for low-VHF (Fig. 1), which require 60.3 inch-width but is only 70 inches long compared to monster low-VHF to UHF antennas that are more than twice that length. I didn’t find any gain specifications for the antenna but suspect that gain at VHF and UHF will be comparable to the monster antennas. Denny’s Antenna Service (dennysantennaservice.com) did a comparison of outdoor antennas and found that the HD-Stacker did as well as the huge Winegard HD8200U (Fig. 2) except on some low-UHF channels.

This test was done before the repack as it includes stations above Channel 36. The comparison included the DigiTenna DUV-XF, which performed as well or better than the HD-Stacker except at VHF and high (above Channel 36) UHF. The DigiTenna includes an amplifier with a second input that could be used for a high-gain, high VHF-only antenna to create a stack, although when I was searching for one of these for another reader it looked like VHF-only antennas had been discontinued, at least by the major consumer antenna manufacturers.

The performance of DigiTennas at lower UHF channels should improve a bit as Brad Eckwielen, president of DigiTenna, told me he was modifying the design of the fan dipole-driven element to optimize performance between Channels 14 and 36, ignoring channels above 36. Perhaps more important to viewers requiring a preamplifier in weak signal areas, Eckwielen has modified his amplifier to provide 20 to 30 dB of LTE filtering above Channel 36 (608 MHz).

Most filters now allow through signals up to 698 MHz (Channel 51). This is important as T-Mobile and other carriers build out cell sites in the 600 MHz band. TV tuners, which still cover up to Channel 51 (if not Channel 69) will be susceptible to overload if a preamplifier is used. See digitenna.com/Products for more information on the preamplifier.

In my January column (“Checking Out TV Antennas With a $130 VNA”) I used a NanoVNA to check a number of different indoor antennas and noticed the return loss increased at low UHF on most of them. It would be interesting to see what the new DigiTenna-driven element looks like after optimization for lower UHF and I wonder if other manufacturers, like the HD-Stacker, Winegard, Channel Master, Antennas Direct, etc., will be modifying their designs to improve performance in the truncated UHF band.

Since the VNA article, I’ve learned more about the different varieties of NanoVNA. Some new versions have appeared, software has improved, but unfortunately, getting products from China has become much more difficult with the drastic drop in flights between the United States and China due to COVID-19. Products ordered from China are usually shipped by ePacket or similar service that depends on space available on flights to the United States and a hand-off to the U.S Post Office for delivery. Out of the two products I ordered this year, one eventually made it to me in about two months. The other was returned to the sender after a bit over two months, apparently because the shipper couldn’t find any flights. When ordering gadgets from China, use DHL, UPS or some other service with its own aircraft.

The NanoVNA unit I’m recommending now is the one with the 4.3-inch LCD I showed in the January column. This turned out to be a NanoVNA-F. Details on the design of the unit are available at https://github.com/flyoob/NanoVNA-F. Note that the latest version has 0 dBm output at the generator fundamental frequency (up to 300 MHz) and will operate up to the fifth harmonic allowing measurements to 1.5 GHz.

In the 10 kHz to 300 MHz band its dynamic range is 70 dB dropping to 60 dB in the 300 MHz to 900 MHz band. I had no problem upgrading the firmware in my 2019 unit to the latest firmware—it is as simple as copying a file to a flash drive—but I didn’t get the benefit of the extra output (older units were –13 dBm) and the improved RF bridge in the latest hardware version.

If you want the latest hardware, order from www.aliexpress.com at the DeepElec store and use DHL shipping. If you want to order from a U.S. source such as Amazon or eBay, check out the version in the DeepElec store—images, specs, etc.—and make sure the one you are ordering specifies the same version, has the same specs, and looks the same as the DeepElec NanoVNA-F. The price should also be higher, assuming people are buying these units from DeepElec and not importing some no-name clone that may not offer the same performance.

I recently learned of a new NanoVNA, the NanoVNA-V2. This unit has a smaller screen, no battery and no case, as can be seen from the official website at https://nanorfe.com/nanovna-v2.html and also at https://groups.io/g/NanoVNA-V2. The websites claim operation up to 3 GHz with 40 dB dynamic range at that frequency. The website www.tindie.com/products/hcxqsgroup/nanovna-v2/ is selling official units starting at $59.95 as of this writing. A calibration kit and acrylic case are available at extra cost. Special software for Window, Mac OS and Linux is available for the NanoVNA-V2 at https://github.com/nanovna/NanoVNA-QT/releases.

The latest version of NanoVNA-Saver also runs on Mac OS, Windows or Linux and will work with most of the NanoVNA hardware, including the NanoVNA-F and the NanoVNA-V2. This is the software I used in the January article. The software is updated regularly and remains my choice for driving the NanoVNA from a laptop or PC.

Fig. 3 is a shot of the web client connected to my NanoVNA-F displaying the frequency response of a Channel Master LTE filter. Due to COVID-19 and travel restrictions I’ve been unable to get back to Los Angeles where most of my RF adapters are stored, so the accuracy of this plot may not be the best because it was done without using 50 to 75 ohm minimum loss pads or transformers. Follow the instructions on the Web-Client web page. You may have to modify settings in Chrome or, if using Linux, make sure your user is in the same serial device group as the NanoVNA. I had to add myself to the “uucp” group to get it to work.

You can learn more about the NanoV-NA in my column in the IEEE Broadcast Technology Society magazine for March, 2020 (you can search for it on https://resourcecenter.bts.ieee.org). It is free to IEEE BTS members. In the article I show a block diagram of the unit and describe how it works. A key component is a Texas Instruments digital FM stereo matrix decoder!

A final note—I’ve finally gotten around to updating my transmitter.com website. It is still a work in progress, but there are now links on the homepage to folders with some of the tools I’ve created and mentioned in previous articles and what I hope to make a monthly feature—highlighting an article on the website from TV Technology that I wrote more than 20 years ago. The current one is a build it yourself frequency standard and calibrator from March 1994. WWV and WWVH fortunately received funding to continue operating so the device can be built and will still work 26 years later!

As always, I welcome your comments and questions. Let me know what I’ve missed! Email me at dlung@transmitter.com.