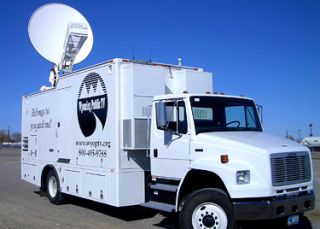 Wyoming PBS, which is based at Central Wyoming College in Riverton, Wyo., is upgrading its mobile production unit with the purchase of four Hitachi SK-HD1000 multiformat high-definition cameras. They replace four older Hitachi SD cameras.

“We chose these new Hitachi HD cameras because they produce beautiful pictures at an attractive price point,” said Kyle Nicholoff, production services manager for Wyoming PBS. “We recently used our truck to produce a discussion show featuring the past, present and the future governor of Wyoming. We had very little room to use additional lights, but the SK-HD1000’s were able to handle the variances in levels and temperatures to produce great looking pictures.’

The truck upgrade to HD is being performed in two phases during the next 18 months and the new cameras are being operated in standard-definition mode at present.

“While the SK-HD1000’s are currently being used in SD mode, they’re actually benefiting us with sharper and more accurate SD pictures than we previously produced,” said Nicholoff.

Wyoming PBS’s 32-foot mobile production van is equipped for satellite uplinking and travels throughout the state to provide coverage of the Wyoming state legislature, sporting events and other outside broadcasts.