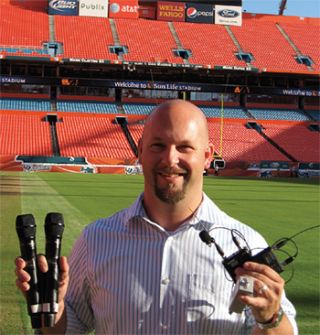 LOS ANGELES: When the FCC mandated the reallocation of analog TV signals to make way for auctions of the 700 MHz frequency band over the last couple of years, operators of wireless microphones, in-ear monitors and intercoms lost a sizeable chunk of usable spectrum.

"It's gotten to where you have to play every single trick in the book to get things to work—and that's not including what happens next year when the portable white space devices come out," commented James Stoffo, founder of Professional Wireless Systems (PWS) and one of the industry's foremost RF consultants.

Brian Lykins, director of operations for the Miami Dophins, uses Shure's Axient wireless system to minimize RF interference to wireless mics. The very first TV band device or TVBD, as white space devices are now known, went into operation in Wilmington, N.C., Jan. 26, 2012. Although operation is limited to the immediate geographic area for the moment, TVBD use will soon expand nationwide, and portable consumer devices are expected to arrive in 2013.

Some major televised events demand staggering numbers of wireless channels. Although Stoffo didn't work the Super Bowl this year—that honor went to Jason Eskew, PWS project manager, and team—he reported that there were "at least 3,000 devices on the field transmitting simultaneously."

Project forward a year, when potentially 100,000 fans at the Rose Bowl, or a couple of thousand at any performance venue, could be walking around with portable TVBDs. "When they fire up, the intermodulation is going to crush anything in the UHF band," said Stoffo.

"We're just going to have to learn to survive," observed Mark Donovan, CTS-D, CTS-I, sales engineer, installed sound for Audio-Technica U.S. "For years, end users have gotten away with some pretty sloppy practices. Those days are over."

For Donovan, there are three approaches to coping with the new RF landscape, beginning with education, especially for end users. "The second aspect is more efficient use of what little territory has been left to us. The third is developing new technologies that work outside that [UHF band]," he said.

Five years ago, Audio-Technica launched its SpectraPulse Ultra Wideband digital wireless system, which operates in the 6 GHz range, above S Band and Wi-Fi, for commercial installation use. "It also runs at a very low level, so while it's not getting interfered with, because of its low level, it's not going to cause interference either," Donovan noted.

Shure, too, is refining its technology to better assist operators, according to Chris Lyons, manager, technical and educational communications. "The goal is to make more systems fit into less spectrum," he said. "When we launched the Axient system last year that number went up to 15 systems per TV channel. We just launched a new system, the ULX Digital, which can do 14. This is compared to analog systems doing eight to 10."

Joe Ciaudelli, director of market development and education, Sennheiser, agrees that many operators need to step up their games. "Best practices are becoming more important, and will get even more important as we move forward," he said.

Sennheiser has placed great emphasis on education, as Ciaudelli detailed. The online Frequency Finder displays RF activity in any given ZIP code, and its Sennheiser Intermodulation Frequency Management (SIFM) software is freely available.

The highly linear booster in the Sennheiser AB 3700, also found in the A 3700 and AD 3700, prevents intermodulation harmonics. "With these two software tools, anyone who understands about finding a clear channel and coordinating frequencies can use them and operate reliably," said Ciaudelli.

Spectrum band planning is crucial, agreed Stoffo. "Suddenly I find myself on just about every award show; I guess people finally realized that they need a dedicated RF person," he said.

In order to squeeze as many systems as possible into each 6 MHz TV channel, he said it's advisable to reduce the footprint of the systems, which are based on a technology—FM—that has been in use since wireless mics were introduced in the U.S. in 1962. "The latest trick that I've been doing is turning my FM modulation down," Stoffo said.

Each FM channel requires slightly more than one frequency, so filtering, too, is becoming increasingly important, said Stoffo. "I've been stocking up on six meg cavity filters," from Microwave Filter Co. in Syracuse, N.Y., he shared.

Alternative technologies could offer some relief from the congestion. "I do know that there's at least one manufacturer working on a product that will be introduced probably over the next few months that is outside of the UHF band," Stoffo confided. The extremely narrowband analog system, from a start-up company, promises to cram as many as 150 channels into a 6 MHz spectrum chunk, he said.

"If we don't learn how to play nice and deal with this they will take the rest of it from us," said Donovan, noting the mounting pressure, both from the communications giants and the government, on the FCC to auction more spectrum. "When a TV channel is worth four to six billion dollars for a 6 MHz chunk, that's pretty hard to talk against," he said.

The industry might want to reframe its arguments against such an auction, said Ciaudelli. "What's missing from the debate is spectrum needed for content creation. U.S. entertainment and news content is the best in the world and we should reserve spectrum to create this content, since it is such a vital economic part of the fabric of this nation."