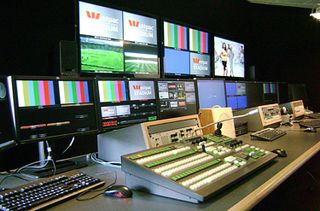 The Granite 5000 will replace three separate devices: a 16-input Ross analog switcher, an Inscriber CG and a clip server. The system’s built-in Fluent Multi-View technology will shrink the control room’s footprint even further by reducing the technical director’s current bank of CRT monitors to four dedicated LCD models. Three 42-inch LEDs, for viewing by personnel or visitors, are fed separately by a Harris multi-viewer.

Before the upgrade, footage was produced in 4:3 and stretched to fit the 16:9 replay screens. Now, footage is HD quality from the start, with the potential for widescreen SD downconversion. Additionally, Granite 5000’s 2 M/E capability allows for separate presentations on each stadium screen.

Westpac Stadium is located in Wellington, New Zealand, and has a 34,500-seat capacity. It features a regular schedule of concerts, sporting events and will be host to no less than seven matches of this year’s Rugby World Cup.