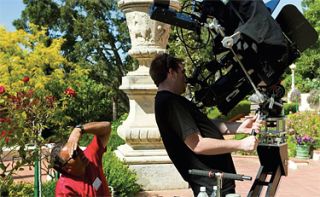 SAN DIEGO
3D is going to be the jewel in the crown of WealthTV when they start broadcasting it 24/7 to their more than 10 million U.S. and Caribbean cable and telco viewers starting at the beginning of 2011.

Several of its series such as "Wealth on Wheels Classic" are already available on demand in 3D for Verizon's FiOS TV subscribers. This may be an awkward economic climate in which to introduce such a venture, but WealthTV had a successful launch in HD (and SD) in June 2004, and all this year they have been running numerous tests in 3D over their existing 1080i HD infrastructure.

"WealthTV lets viewers travel all over the world and experience some of the finest things," said Charles Herring, president of WealthTV, "but those are not limited to just material value. Our motto is 'It's your life…spend it well' and our ratings have improved dramatically over the last year and a half despite the global economic situation."

"In our mind, the term 'WealthTV' refers to an abundance of good," Herring, Sr. said. "We're trying to show the finer things in life regardless of our viewers' economic status."

Currently, 95 percent of WealthTV's HD programming is either produced in-house or by commissioned production partners although they also air major theatrical feature films. They have ramped up their foray into 3D production with a half dozen beam splitter camera rigs and one of the largest pre-purchase orders for Panasonic's AG-3DA1 integrated twin-lens 3D camera/recorder due to be delivered by the end of August.

"We actually capture all our 3D in 1080p, but current bandwidth constraints limit us to sending out a 1080i side-by-side format," Charles Herring said. "That means our source archives will be evergreen for the future, but today's customers can record our shows with a conventional HD DVR. All the home 3DTV's we've tested can display it with no problem."

This is a similar path to 3D distribution that the British Sky Broadcasting Group has found so practical for their 3D launch in the UK and Ireland. All the home viewer needs is an HDMI 1.4 cable and a high definition 3D-ready TV.

WealthTV has been preparing for its 24/7 3D launch from its 40,000 square-foot headquarters in San Diego since the beginning of this year by building a 3D library with production partners such as Randall Dark Productions, Al Caudullo Productions and Corkscrew Media. That arsenal includes travel series "WOW!", automotive series "Wealth on Wheels," a homes and estates show "Behind the Gates," a new series called "Great Markets & Tastes," and "3 Cities in 3D," (see "A 3D Ode to the Smokies," Aug. 4, 2010)

They have also produced 3D specials on "The Hearst Castle" and a "Doc Walker" concert on which 3D pioneer Tim Dashwood, creator of the Stereo3D Toolbox, was one of the videographers.

WealthTV has already upgraded all of its eight edit bays to 3D and plans to add two more soon. According to Senior Editor Allen Randolph, they all use Apple's Final Cut Pro NLE software on 8-core Macintosh platforms augmented by the complete CS5 suite from Adobe Systems and Cineform's Neo3D to help with 3D editing and mastering.

Chris Schickendanz (right), 3D stereographer for WealthTV, shooting Hearst Castle with a beam splitter 3D rig "Neo3D lets us edit one eye only as we are accustomed to in 2D, and then go back to deal with 3D-specific matters such as convergence on the 40-inch Samsung 7000 model active 3D sets we have put in all the edit bays," Randolph said. "That ensures that the editor is viewing the same image display that the consumer will see. Then we also use Stereo3D Toolbox's alpha file support to properly position lower third graphics in 3D space."

Randolph's editors output their masters in side-by-side 1080i HD to Sony HDCAM tape for air. "It actually has turned out to be simpler than I had anticipated," he said, "and we have the confidence that Neo3D will let us convert our shows to any other format the future may require. Some day we hope that will include the full 1080p sequential frame format as bandwidth becomes available."

Fulfilling a 24/7 3D broadcast schedule is going to be daunting, but WealthTV has decided not to invoke the 2D to 3D conversion technologies starting to come on the market.

"The automatic conversion systems we've tested are just not up the 3D quality we want to provide our viewers," Charles Herring said, "and the more labor-intensive rotoscoping processes are simply not cost effective. So we are going to be relying on original 3D productions to fill our broadcast schedule for the foreseeable future."

The question remains, however, will 3DTV will ever become a mainstream medium?

"We are convinced that if we can offer our customers a better, more realistic viewing experience, that technology will be successful," said Charles Herring. "The question that remains to be seen is if 3D can deliver that goal without any limitation. If it does, 24/7 3D broadcasting is going to take off in a very big way."