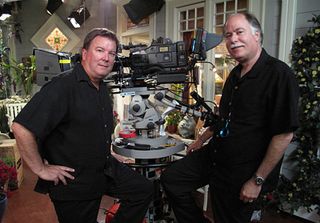 Vinten will supply the camera heads and pedestals used on set for the filming of TVLand’s new sitcom Hot in Cleveland. They will be used to support a number of Sony F900 cameras.

Camera operators on set all prefer the Vinten Vector heads for their versatility, low profile and durability. The controls are described as intuitive, enabling the operators to focus their attention on best capturing the performers.

One particular setup asked for a low-angle, eight-foot tracking shot leading into a scene. The Vinten gear went from pedestal to slider in a matter of moments. Later, the same configuration was mounted on a scissor lift with an out-rigged high-hat tilted straight down from 15 feet up. The Vinten head’s ease of use made light work out of these difficult shots.

The Vinten Vector 750 camera head provides a large center of gravity range, employs the proprietary Perfect Balance technology and can support up to 165.3 pounds.

Hot in Cleveland will begin production of its second season this October. New episodes are slated to air January 2011.