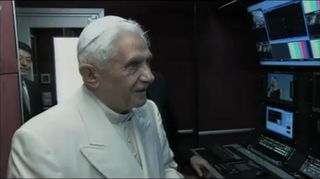 ROME: The Vatican has announced the launch of a new high-definition TV channel to be produced with a newly acquired mobile unit. A new over-the-air DTV channel focused entirely on Vatican activities with no commentary is part of an overall media package that includes a new Web site as well.

The new HD channel is expected to be up in time for the Pope’s Christmas midnight mass, according to several reports from a Vatican press conference held Tuesday.

“This will allow future papal ceremonies to be transmitted in 3D,” the Rome Reports said. “With these new tools, the Vatican aims to attract more people to events with the Pope, and deliver his message in top quality.”

The Pope toured the new mobile unit, a 46-footer with 16 workstations, according to the Catholic News Service. The Vatican TV service, CTV, invested more than $6 million in the new truck, with Sony Italy providing a discount of more than $1 million. The Knights of Columbus contributed another $1 million, and CTV covered the rest.

A Vatican spokesman said the decision was made to upgrade to HD to meet the production values of distributors.