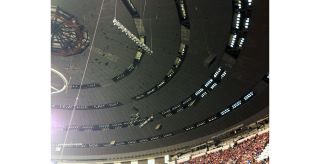 NEW ORLEANS – The 47th Super Bowl had everything—a nail-biting finish, memorable commercials, fleeting expletives, possibly the largest-ever audience, and a pyrotechnic half-time show that blew fuses. (As it turns out, the final numbers made it the No. 3 largest broadcast of all time, behind the 2011 and 2010 Super Bowl telecasts.)

“During the blackout period we lost about half of our cameras,” said Ken Aagaard, executive vice president of operations, engineering, and production services for CBS Sports. “They all came back when the lights were back.”

The Super Bowl is always a showcase of the latest professional live production and broadcast technology. Last night’s game between the San Francisco 49ers and the Baltimore Ravens was no different. CBS employed as many as 70 cameras to cover the game, including six 4K units used to capture close-up shots for artifact-free replays. Referred to as “Heyeper Zooms,” the cameras had their own dedicated mobile unit from NEP.

Aagaard said nothing shorted out when, a few minutes into the second half, the power went out at the New Orleans Superdome.

“Most of our equipment was on generators and never affected,” he said.

The cause of the blackout, which persisted for 34 minutes, is still being determined, according to current reports. CBS News said “officials revealed that an ‘abnormality’ in the power system triggered an automatic shutdown, forcing backup systems to kick in,” but what caused the “abnormality” remains unknown. USA Todaysaid Beyoncé’s half-time show was not the culprit.

After the flaming performance by Beyoncé and an army of female dancers and backup singers, the teams returned to what had been a blow-out—the 49ers were down 6-21 to the Ravens. The temporary outage seemed to reinvigorate ’9ers quarterback Colin Kaepernick, who led the team to score 25 more points in the second half. A final effort to reach the end zone failed and left the Ravens victorious at 34-31.

The drama—compounded by the teams being coached by brothers John and Jim Harbaugh—unfolded en masse across social media. Twitter counted 24.1 million tweets during the game, smashing last year’s Twitter traffic, according to Omit Ashtari, Twitter’s head of Sports and Entertainment. Beyonce’s performance generated some 268,000 tweets per minutes, The power outage itself got 231,500 tweets per minute. It was one of most trafficked events on social media, and most-watched on TV.

Another notable but not first-time event during Super Bowl XLVII: An F-bomb during the post-game, on-field celebration. Ravens quarterback Joe Flacco appeared to say, ‘This is f—-ing awesome.’” The Parents Television Council responded by asking Federal Communications Commission to investigate CBS for letting the curse word slip through. The comment came before post-game coverage went to tape delay, according to John Eggerton of B&C.

Tape-delays were employed during more live performances after the infamous 2004 Super Bowl wardrobe malfunction exposing Janet Jackson’s breast. The PTC also protested after that incident. CBS subsequently was fined $550,000 by the FCC. The network fought the censure all the way to the Supreme Court, which refused to reinstate it after a federal appeals court vacated it. PTC last year targeted NBC’s Super Bowl XLVI half-time show in which performer M.I.A. visibly flipped a bird.

This year, PTC also took issue with a pre-Super Bowl teaser featuring model Kate Upton distracting some guys washing a Mercedes Benz. The real stinker during the game was an ad from GoDaddy.com featuring super model Bar Refaeli kissing a stereotypical geek lad in an extended close-up complete with audio. The ad was at the bottom of the USA Today’s Ad Meter, which employed 7,619 pre-registered panelists to rate the commercials. Budweiser’s horse-and-trainer spot was the favorite, with the Tide “Miracle Stain” coming in second, and Dodge Ram’s ode to farmers, third.

Advertisers, who paid a reported average of $4 million per 30-second spot on TV, took advantage of the social media traffic during the blackout. Oreos brought on, “You can still dunk in the dark,” while Tide posted, “We can’t get your blackout, but we can get your stains out.”


(Darkened Superdome image is a twitpic by NBC’s David Gregory)