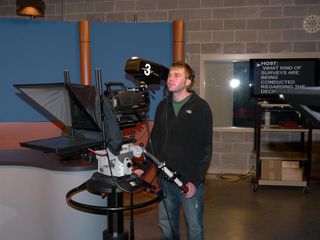 The sitcom, created and produced by then-senior Noah Sargent in the spring of 2012, is set in a shop that offers coffee on one side and pizza on the other.

UNT students handled every aspect of the multi-camera production, including using actors from the theater department, who performed before a small studio audience.

“This was one of the most ambitious projects we’ve attempted, and the results were impressive. Were it not for the quality of these Hitachi cameras, we probably wouldn’t have attempted this,” said James M. Martin, a senior lecturer at the University of North Texas and technical supervisor of the sitcom, who collaborated with theater Professors Adam Chamberlin and Mario Tooch. “The Hitachi cameras produced excellent HD image quality, and the students were able to ‘dial in’ the exact look they wanted because the camera shading controls were so easy to use.”

“Producing these sitcom episodes put our students in a real-world, multi-camera television environment where they could really apply and refine the skills they learned in class,” said Martin. Previously, the students primarily produced newscasts, such as “The NTTV Nightly News,” a half-hour report featuring field reports via Skype, elections coverage sby local cable systems, as well as a Spanish language program. The university has won several “Lone Star Emmy Awards for Excellence in Student Broadcasting” for these productions.

The production maximized its resources, especially Studio A where the set and risers for 35 audience members were constructed. The larger of two studios, it has an adjacent control room that houses a Ross Vision-M 1.5-M/E multi-format switcher, Compix Synergy 2 dual-channel HD graphics system, Blackmagic Design Videohub router and a 360 Systems HD Max server.

“Since we installed six Hitachi Z-HD5000 HD cameras in 2010, we’ve transitioned to a fully digital, HD-SDI workflow that helps make the most of the high-quality imagery these cameras capture,” Martin said.

The three “Peppuccinos” episodes were staged and recorded in one weekend, and that video is being edited by students using Apple Final Cut Pro. When finished, the shows will air on North Texas Television, a local origination channel devoted to UNT programming that is offered by the local Charter cable system, as well as on the university website.
“Based on the success of these three episodes, we’re looking forward to offering more multi-camera production projects and classes where students can obtain valuable skills and academic credit,” said Martin. “Our goal is to prepare our students for the media jobs of the 21st century by giving them training they can’t get anywhere else.”