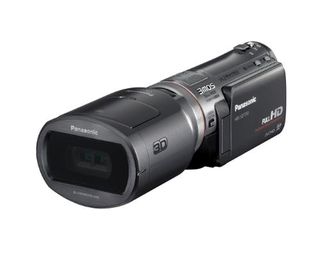 SECAUCUS, N.J.: Panasonic revealed details about its new consumer 3D camcorder this week after news of it leaked before the planned unveiling. The new HDC-SDT750 was supposed to debut today in Japan,but Engadget got a hold of details over the weekend.

Panasonic describes the SDT750 as “a user-friendly consumer 3D camcorder” that records full 1080p video in AVCHD, and shoots in 3D with the use of a conversion lens. It captures left- and right-eye images simultaneously through two lenses at 960 x 1080 pixels, recording them side-by-side.

Features include a 3MOS system, a Leica Dicomar lens and a 12x optical zoom. The camcorder does time-lapse recording at intervals of one, 10 or 30 seconds and one or two minutes, and features 5.1 channel audio recording with five mics.

Video captured in 3D can be played back on 3D-capable Panasonic Viera TV sets via HDMI. 3D video can also be recorded onto SD memory cards and played back on Panasonic’s AVCHD-compatible 3D Blu-Ray Disc players.

The SDT750 comes with HD Writer AE 2.6T PC editing software, which facilitates editing and saving on a PC or Blu-Ray disc.

The camcorder sports a 3-inch LCD that automatically adjusts for brightness. It pre-records for three seconds before the record button is pressed, and automatically shuts down when not operated for five minutes.