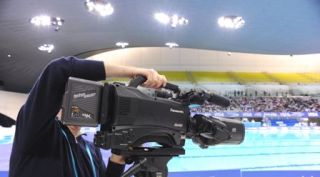 LOS ANGELES: The broadcast industry could be at a significant watershed in the development of 3D broadcasting to the home.

In June, the DirecTV cut back its n3D channel, the first 3D channel intended for 24/7 broadcasting, to a part-time schedule. This is usually attributed to a lack of sufficient 3D content that can attract a home audience large enough to support its distribution.

“With the variety of other 3D channels and content that DirecTV currently offers, our customers have as much programming as there is available covering all genres including movies, sports and music,” said Chris Long, senior vice president, DirecTV Entertainment. “Regarding future plans, DirecTV will continue its commitment to broadcast quality 3D programming like NBC Universal’s 3D coverage of the 2012 London Summer Olympic Games that we are delivering to our customers nationwide.”

This means that although all 302 sporting events were streamed live over the Internet through a combination of host broadcaster feeds and simul-streams of NBCU cable channels, none of them were simulcast in 3D in the United States.

“Sports has historically been a major driver for the adoption of new broadcast technologies,” explained Eisuke Tsuyuzaki, chief technology officer, Panasonic Corp. of North America. “But prime time in the U. S. is 1 a.m. in the U.K., so having a 3D simulcast became more of a scheduling issue decided by NBC and the Olympic committee than anything else.”

Their signals can be received by a growing number of 3DTV sets, according to Paul Gray, director of TV electronics research for NPD Display Search. “Last year, almost 3.42 million 3D-capable sets were shipped to the U.S. and 5.13 million are expected this year,” Gray said. “Of those 3D flat panel screens 40-inches and larger, LCD technology represents 16.6 percent and 21.4 percent are plasma. In Q4 2011, 64 percent utilized active shutter glasses, and 36 percent had polarized displays seen with passive glasses.”

REAL NUMBERS
But who knows what the real size of that 3D audience is? Representatives from ESPN 3D, Wealth 3D and DirecTV have not shared viewership statistics.

“At this time, ESPN 3D is not measured by Nielsen,” said Bryan Burns, ESPN vice president, strategic business planning. “ESPN 3D is available to more than 60 million homes throughout the country. We’re still in the early stages of 3DTV. We knowingly hit the on-ramp early and are still in the education phase.”

For many, a major drawback to increasing the popularity of 3DTV has been the current frame- compatible system of delivering the signal. This means the left and right eyes have to be squeezed either side-by-side or over/under into the same 19.39 Mbps ATSC signal allocated for HD, which results in reducing the resolution of each image by half.

But there is great momentum toward developing “service compatible” standards that could provide two channels of full resolution within that same bandwidth. Last month, Digital Video Broadcasting (DVB), an industry-led consortium of over 230 broadcasters, manufacturers and regulatory bodies, approved Phase 2a of the DVB-3DTV specification used by many U.S. satellite and cable operators.
David Wood “Our goal is to provide a full MPEG-2 resolution signal that can be seen either on any 2D high definition set or a 3D display that has been equipped with the proper decoder,” said David Wood, chairman, DVB commercial module for 3DTV and head of New Media for the European Broadcasting Union. “To create the 3D, specification Phase 2a provides a 12 Mbps 2D version plus an additional MPEG MVC [multi view coding] signal derived from the difference between the left and right eye. The full 2D channel, called the ‘anchor image,’ can be either the right or left eye as determined by the content creator.”

By the end of the year, the Advanced Television Systems Committee (ATSC) should also have formulated a service-compatible scheme for terrestrial 3DTV broadcasting.

“We are currently exploring several approaches,” said ATSC president, Mark Richer. “One would be to provide two separate streams in the broadcast signal, one encoded as MPEG-2 and the other using the more efficient compression of Advanced Video Coding (AVC), or H.264/MPEG-4. Another would be a hybrid approach where the broadcaster would send out one eye using their over-the-air bandwidth, and the other on a mobile channel. That means at least one stream on the mobile service would have to be a simulcast of the main broadcast channel. But that’s probably what they are going to do anyway.”

The Consumer Electronics Association hasn’t been sitting still when it comes to 3DTV standards either. Last month the association announced the CEA-2038 standard for Command-Driven Analog IR-Synchronized Active Eyewear, which describes how to control active 3D glasses worn by viewers using an infrared signal sent by a TV set. It also released a standard for closed captioning in the 3DTV environment.

No matter how it is delivered, the challenge for 3DTV continues to be the difficulty of establishing a profitable business model for its broadcast. At the 2012 NAB Show, Director James Cameron and Vince Pace co-founders of the Cameron|Pace group, proposed the idea of “5D” production by shooting 2D with 3D “shadow” cameras at the same time. The system was used with great success during the ESPN Winter X Games.

“3D is the future, and a big part of that future is in broadcast,” Cameron said at the time.

But when asked about the DirecTV programming cut-backs and NBC Sport’s next-day delay of their 3D Olympics coverage, Pace replied, “Both of those situations are heavily weighted sponsorship models with completely separate business costs on top of the 2D effort. Business models that match the foundational entertainment value of 2D and enhance it through the display of quality 3D will be the future.”