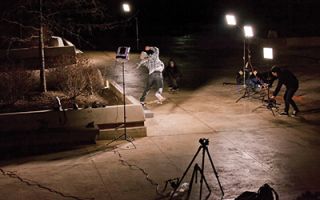 Jim Geduldick shoots with a RED EPIC and Vision Research Phantom Miro. The Phantom Miro M320S from Vision Research is a rugged, high-speed camera that can shoot 1,380 fps at 1920x1200 or more than 1,500 fps at 1920x1080, thanks to 10 μm pixel microlenses on its customdesigned CMOS sensor. That sensor also gives it significantly enhanced light sensitivity for a 2-megapixel camera with 3.2 gigapixels per second throughput.

Scientists and engineers have experienced the benefits of the Phantom Miro eX series cameras since 2007. But with the latest generation M series of Phantom Miros, independent filmmakers are also learning how a camera that captures all that overcranked data can enhance their digital productions.

FROM SCIENCE TO ENTERTAINMENT
“Whenever you see a slow-mo car crash test on TV, chances are it was shot with a Phantom camera,” begins Rick Robinson, director of marketing at Vision Research in Wayne, N.J.

“Introduced in 2011, the Phantom Miro family was originally targeted at the scientific community, but we soon realized that with the addition of features such as an HD-SDI output port, it would be very attractive to digital cinematographers,” Robinson says. “Then ... at the [2012] NAB Show we brought out the Miro M320S, which is capable of shooting 1,540 fps in 1920x1080 HD. We gave users the choice of four lens mounts: F-mount, C-mount for scientific/engineering applications, or PL-mount or EOS styles to meet the needs of digital cameramen. It also has 12-bit pixel depth for excellent image quality to satisfy the hunger for high-speed imaging at an affordable price.”

Geduldick shoots a motocross event with Phantom Miro. The Phantom Miro M320S starts around $45,000 and, depending on the accessory package, can go up to $60,000. That’s about half the cost of a Phantom Flex, although the Miro line does not have the Flex’s level of resolution, write-to-storage speed or recording capacity.

Video clips are saved in the camera’s internal RAM (three, six and 12 GB capacities are available). Utilizing Vision Research’s own removable, non-volatile CineFlash storage technology, the Miro M320S can quickly save 10-bit log raw cine files from the camera’s internal RAM to 60, 120 or 240 GB CineFlash modules. Their contents can then be downloaded through a docking station to a computer with the help of Phantom Camera Control software.

The M320S supports Vision Research’s new Phantom PH16 protocol, providing it with enhanced white balance and color processing controls. To help calibrate the camera when shooting in widely varying lighting conditions or high dynamic range situations, the Miro M320S has an internal shutter that covers the sensor before every take. This gives the camera an absolute black level reference for each shot for the best possible image quality.

TESTING THE CAMERA
Cinematographer and editor Jim Geduldick was an alpha tester of the Miro M series, having received the first two that came off the production line a month or so before April’s NAB Show. He wanted a pair of the cameras so he could configure one with a PL mount for his ARRI lenses and the other with an EOS mount for Canon glass.

When we spoke, he was using a Miro M320S on a documentary about a blind judo athlete training for the 2012 Paralympic Games. “When shot at high frame rates, judo is really like a ballet between two dancers,” Geduldick says. He praised the small form factor of the Miro M320S and its attendant flexibility, noting, “Camera movement is what sets high-speed videography apart.”

But Geduldick learned that if you shoot at the camera’s highest speed, 1,540 fps at 1920x1080, you’ll quickly fill up your recording media. He recommends relying on the camera’s built-in shot trimming capability in RAM and having a download station nearby to free up those CineFlash modules.

He also recommends experimenting with wide-angle lenses for close-ups. “Seeing the sweat drip off a trained athlete’s face in slow motion can be almost sensual,” he tells me, “but remember that high-speed shooting requires a lot of light. The Miro M320S is amazing in daylight, but you’ll need a lot of tungsten if you’re shooting indoors. So you need to watch for the flicker if you’re shooting under something like stadium lighting.”

Steve Romano is a New York-based DP/ digital imaging technician who has been using Vision Research cameras since the original Phantom HD. He has used the Miro M320S to shoot music videos, promos and a show produced by True Entertainment called “Too Cute” for Animal Planet.

“This camera is kind of like a GoPro HERO camera, but with a high frame rate,” he says. “It’s so light, it lets me get shots I could never get before using larger cameras without massive Steadicam rigs.”

To keep the video noise level down in his high-speed shots, Romano recommends that you crush the blacks (lower the black level). “Always keep a 5K or greater light in your kit so you have enough illumination,” he suggests.

Like most high-speed cameras, the Miro M320S shoots in a loop mode with a circular buffer, so Romano finds it imperative to black balance regularly. “You may be waiting minutes for something to happen, and by the time it does, you have lost your original black balance,” he says. “So use the internal shutter to black balance all the time.”

Romano makes sure he always gets insurance when renting a camera like the Miro M320S. “If you have a camera small and light enough to strap onto a running dog, people are going to do it,” he laughs, “so you better keep yourself covered whether renting or buying.”

Trent Kamerman, owner of 800Kamerman (a company name that doubles as a toll-free phone number), and his production manager/producer, Nick Balogh, use their Phantom Miro M320S mostly for ENG work for clients including ESPN. “I bought the camera right at NAB, and Vision Research made sure we had it in time for June’s X Games 2012,” Kamerman reveals. “We had Nick stand on the top of the MegaRamp to shoot skateboarders flying by to catch big air. Shooting at 500 fps, you could actually see what the athlete’s feet were doing on the board.”

The camera’s workflow let them get footage into the ESPN truck “super fast,” Balogh says. “We kept a Sound Devices Pix 240 recorder on hand so we could offload our footage and play the shots on the monitor in DNxHD right away. We call it ‘baking’ the shot, and it let us get the footage to the ESPN production truck as fast as possible.”

Like all the cinematographers using the Miro M320S, Kamerman and Balogh found that shooting high speed smooths and stabilizes all the imagery it records. “You can go from the bottom of a bike wheel all the way up to the rider’s face and it looks rock solid,” Kamerman says. “It was an incredibly fast shot when I took it, but when slow-mo’d, it looks super dramatic.”

Better, faster, cheaper. Digital camera evolution is a wonder of our age.