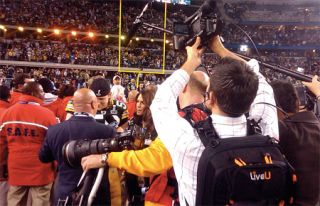 OVERLAND PARK, KAN.: Sprint is teaming up with LiveU to provide live HD video transmission to its enterprise-level customers. Sprint today said it signed an agreement to incorporate LiveU’s backpack video transmission technology into its Machine-to-Machine initiative. Sprint said it intends to use the LiveU technology to create “a mobile video transmission solution that delivers HD video quality and combines multiple 3G and 4G air cards for one resilient uplink.”

Sprint is in the process of a $7 billion dollar network upgrade, with plans to launch 4G LTE advanced cellular networks in six cities by mid-2012, according to Dow Jones. The LiveU technology could prove helpful to Sprint as broadcasters increasing adopt the technology for backhaul to save the expense on satellite and microwave links. Sprint noted that LiveU had already used the network to facilitate “thousands of live broadcast hours, by major U.S. media companies.”

LiveU and Sprint will target TV networks, news media, enterprise, transportation, surveillance, security, governmental and medical markets for 24/7 live video transmission “from any location,” Sprint said. The agreement incorporates both LiveU’s LU60 backpack transmitter and LU40i handheld live video uplink device. LiveU technology has been used to provide coverage of the NBA Finals, the Super Bowl, the Olympics, the Grammys, 2012 election activity, the London riots and other events. The company recently announced a deployment deal with Sinclair Broadcasting Group for the use of LU60s in newsgathering.

LiveU calls the LU60 “the industry’s first bonded 3G/LTE” backpack platform. The device can bond up to 14 network connections—be they 3G, 4G, BGAN, WiMax or Wi-Fi—for handling1080i or 720p video using H.264 AVC at a data rates of 128 kbss to 30 Mbps. The LU60 weighs about 11 pounds. battery included. The LU40i uplink weighs less than 1.5 pounds—LiveU shows it in a belt pack—and measures about 5-by-6-by-2.5 inches. The LU40i can bond up to six network connections.

Sprint opened its M2M lab in October of 2010 to develop technologies for machines to communicate with each other over its network. The carrier said it already team dedicated to fast-tracking M2M technology over its 3G network.

No. 3 U.S. carrier Sprint-Nextel is racing with Verizon and AT&T to deploy 4G LTE networks, which have to be separate from existing 3G and networks. The company secured the rights to market iPhones last fall, but the deal came with a reported price tag of $15.5 billion. The carrier tapped the debt market late last year for $4 billion, and is looking to net $3 billion in funding from vendors in the coming months, according to Light Reading.

Sprint was hoping to facilitate the launch of a 4G LTE network through a partnership with LightSquared, but that fell through after federal officials determined LightSquared’s technology would interfere with global positioning systems. Spint-Nextel is currently working with Dish on a deal that would allow the satellite TV provider to offer wireless voice and data.
~Deborah D. McAdams