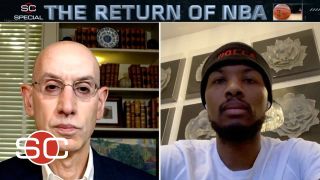 BRISTOL, Conn.—Major League Baseball fans—and by extension the video production crews that televise games—could not be blamed for being disappointed last night when MLB commissioner Robert Manfred Jr. reported on an ESPN special that a 2020 baseball season is uncertain.

“We are running out of time. The clock is ticking on this. But the key, the important first step is a willingness on the part of the MLBPA (Major League Baseball Players Association) to get back to the table and engage in the process,” said Manfred during the two-hour “SportsCenter Special: The Return of Sports.”

Manfred, who last week said during an interview that he felt 100% certain there would be a baseball season this year, told ESPN host Mike Greenberg that now he is “not confident” there will be a season.

At issue is a disagreement over player compensation and no agreement with the association on health and safety protocols intended to protect against coronavirus infection.

“I think there is a real risk [of a cancelled season], and as long as there is no dialog, that real risk is going to continue,” he said.

The interview with Manfred was recorded before the show aired June 15. Later in the day, MLBPA issued a statement on the situation to ESPN.

“Players are disgusted that after Rob Manfred unequivocally told players and fans that there would 100% be a 2020 season, he has decided to go back on his word and is now threatening to cancel the entire season,” the statement said.

The association denied that it has done anything to delay progress on health and safety protocols. The statement alleged MLB has not negotiated in good faith from the beginning.

“This has only been about extracting additional pay cuts from players, and this is just another day and another bad faith tactic in their ongoing campaign,” the statement said.

The special report’s look at other leagues was far less dire. The NHL, for instance, is expected back on the ice in early August with games through October. Two hub cities, currently undetermined, will host play, and fans will not be allowed to attend games.

There will be a 24-team tournament. A five-game play-in round for teams that were on the bubble when the league suspended play, will be followed by a regular Stanley Cup playoff series—four rounds of the best of seven, said NHL commissioner Gary Bettman.

The NHL is relying on medical experts for guidance and is focused along with the players’ association on adhering to strict health and safety protocols, he said.

“We will carefully monitor with extensive testing all of the players that are in the hub cities and the supporting personnel,” said Bettman.

COVID-19 testing will be done every day. If a player or other personnel tests positive, that person will be isolated. Contract tracing will be used to identify others who might have been infected, he said.

“We are being told that an isolated case or a couple of isolated cases shouldn’t interfere with plans to be able to move forward,” said Bettman.

Players, who haven’t been on the ice for months, face another potential health risk—not being in game-ready shape when play resumes. “For a lot of our players, this is the longest they have ever gone without skating,” he said. The league has been flexible on when it will return to play to give players a chance to regain their conditioning.

Major League Soccer, which suspended play in early March after two games due to coronavirus, has picked July 8 to return to action. It will hold a World Cup-style tournament at the ESPN Wild World of Sports Complex at Disney World in Orlando, Fla. There will be three group-stage games and a 16-team knockout round.

Taking a cue from Germany’s Bundesliga, which has resumed play within the past couple of weeks, MLS will enhance its video, audio and fan interaction technology, said Don Garber, MLS commissioner.

Playing on an open field “does give us an opportunity to use technology in ways we have been contemplating,” he said. While he didn’t give details, Garber said more cameras, more audio and “unique virtual insertion technology” will be used. The league also is exploring ways to enhance fan engagement with technologies, such as Zoom. “We have a unique open palette.”

With nearly 2,000 people due to participate in the tournament, COVID-19 testing will be central to the return, said Garber. Anyone testing positive will be isolated in a hotel room, and contact tracing will be initiated. Players will be tested every other day.

Following the tournament, MLS plans to hold a regular season, playoffs and an MLS Cup championship before the end of the year. “My hope, and really my expectation, and I’m optimistic that in the fall we will be able to return into our home markets, complete as much of the regular season as we can and obviously through crowning a champion,” said Garber.

The National Women’s Soccer League will be the first professional team sports league to return to action in the United States. In place of a regular season, cancelled in April due to the pandemic, the league will host the NWSL Challenge Cup beginning June 27.

The 25-game tournament will take place—without fans—in the Salt Lake City area and with the championship game being played July 26. “I think the Challenge Cup will be an incredible platform for us to promote the game and for everyone to see how women play the sport,” said Crystal Dunn of the N.C. Courage.

Some of the best-known women soccer players in the world, including Megan Rapinoe, have chosen not to play. Many are concerned about the virus as well as the demands for the tournament, said Dunn.

The NBA will resume play July 30 with the finals possibly going into October depending on how many games are necessary. There will be 22 teams in the playoffs. All play will happen at ESPN’s Wild World of Sports Complex at Disney World.

The hiatus “has been incredibly tough on everyone in many ways” just as it has been on “other Americans who sheltered at home, largely isolated until relatively recently,” said NBA commissioner Adam Silver.

Some high-profile players are hesitant to return to the game whether for health reasons or social justice concerns, Greenberg noted. The league has talked to the players’ association over the past several months and “worked through” all of the health and safety issues and what it will be like on the campus, said Silver.

That environment “may not be for everyone” and will “entail enormous sacrifice” on the part of players and everyone else involved, he said.

“Listen, it’s not an ideal situation. We are trying to find a way to our own normal in the middle of a pandemic and the middle of a recession or worse with 40 million unemployed and now with enormous social unrest in the country.” If a player chooses not to come “we accept it,” said Silver.

The NBA protocols include physical distancing and the wearing of masks in circumstances when people have to be close to one another, he said. There will be daily testing, and if there is positive, there will be isolating and contact tracing.

The league is looking to hold its draft Oct. 15, a return to training camp in November and a tentative start to the next season in December, he said.

The WNBA will play a 22-game regular season, starting July 24, and hold a full playoff. The games will be played at IMG Academy in Bradenton, Fla. No fans will be present. Greenberg asked the league’s commissioner about social justice.

“Our players will all be together for the first time in history at a single site,” said WNBA commissioner Cathy Engelbert. “We have one of the most diverse leagues in professional sports—80% black women—and all of our players are really, really actively looking forward… [to] the platform they can launch from IMG Academy around social justice.”

With some players on the Texans and the Cowboys reportedly testing positive for COVID-19, Greenberg asked NFL commissioner Roger Goodell about how the development impacts the league preparing to resume play.

“Positive tests are going to happen,” he said. “The issue is can we—obviously—prevent as many of those from happening but in addition treat them quickly, basically preventing a problem.” Goodell pointed out that none of the infected players were in facilities where they could infect other players.

When asked about Baltimore Ravens coach John Harbaugh’s recent statement that the league’s safety protocols are “humanly impossible” to comply with, Goodell said that “one of the things we are going to have to do is change and do things we might have thought were awkward or impossible several weeks ago or months ago.”

Goodell also addressed a recent video he released in which he said the league admits it was wrong for not listening to players earlier about their concern over racial inequality in society and encouraged players to speak out.

Prior to releasing the video, the league spent a week and a half listening and “trying to understand the frustration, fear and sadness all of us were going through—particularly those in the black community,” he said.

Goodell said the league should have listened to its players sooner, including Colin Kaepernick and others.

“It actually predates, goes back to 2014 and Ferguson [Mo.] when Michael Brown was killed by police brutality,” said Goodell. “Our players have been at the forefront of bringing attention to these issues.”

The NFL has committed $250 million over a 10 year period to addressing racial injustice and social responsibility, he said.