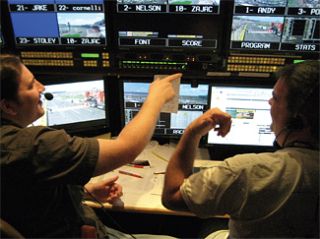 OTTAWA
The NFL on Fox, Major League Baseball on Fox and NASCAR on Fox are all important Fox Sports properties. Yet despite the diversity of these and other Fox Sports programs, all have one thing in common: Their consistent graphical identity.

In fact, although Fox Sports has a reputation for taking risks with cutting-edge graphics, the network's overall graphic design is governed by a single corporate vision: The Fox Sports gritty, action-packed "attitude." The translation of this attitude into a consistent network-wide graphical package is no accident. Fox Sports goes to great lengths to ensure the the graphics seen on air reflect the network's branding at all times.

Fox Sports divides its graphics production into two breakdowns, according to Zac Fields, Fox Sports' manager of remote graphics. "The first is what we call the 'tape breakdown.' These are the pre-rendered elements that are created here at Fox's headquarters in Los Angeles, and then distributed to all of our programs. The second is the 'Duet breakdown,' which are the graphics generated onsite during remote broadcasts in real time."

The tape breakdown encompasses all of the openings, closings, interstitials, bumpers "bugs," and anything else that may be used as stock graphics during any given Fox Sports broadcasts. When viewers think of these programs' visual identities, they're thinking of the tape breakdown elements.

The graphics that are eventually dubbed to D5 tape for distribution to programs—hence the term "tape breakdown"—begin as ideas generated in Fox Sports' Design Department. "The various concepts are developed by our graphics artists using tools such as Adobe AfterEffects, Illustrator and Photoshop; Autodesk 3D Studio Max [aka 3ds], and Maxon Cinema 4D," said Fields. "Once developed, the graphics ideas go through a long process of approvals and tweaks overseen by Gary Hartley, our executive vice president and creative director of sports graphics. After Gary has given his input and direction, the artist takes the finalized concepts and implements them across all of a given program's visual elements, to create a consistent, seamless look."

Once the graphics have been hammered out and distributed, the next step occurs in real time during the network's live sports broadcasts. The various graphics elements reside on the production's video servers—or on removable external hard drives—and are called up and updated using Chyron Duet character generators.

"There are about 50 unique graphic elements on server per program," Fields said. "During the broadcast, the Duet operator uses these elements to frame the various scores and other data that are added during live play. The goal is to provide maximum flexibility during broadcasts for fast input, while ensuring that the overall look is maintained; right down to the typeface."

THE CHALLENGE OF HD & 3D

Years of major league sports experience has given Fox Sports the know-how to predict what kind of pre-rendered graphics are needed for each of the sports it covers. But even with this expertise, Fields and his fellow artists still face challenges on a regular basis.

Fox Sports uses Chyron Duet character generators. A case in point: Even today, not all Fox Sports events are covered in HD. As a result, "we have to produce SD and HD tape breakdowns of our graphics packages, so that our directors have these available as needed," says Fields.

As for 3D graphics? Fox Sports already has some experience in producing them, thanks to the network's 3D production of the January 2009 FedEx Bowl Championship Series (BCS) National Championship Game between the University of Florida and University of Oklahoma. The coverage was seen at the 2009 Consumer Electronics Show in Las Vegas, plus 80 3D-capable movie theaters across the United States.

"Even though we did that event, we're not too concerned about being in 3D right now," Fields notes. "We are testing our existing look in 3D right now, but we are not making major adjustments to it, nor focusing our efforts in this area to any major degree."

Instead, Fox Sports' graphics department is focused on simplifying the real-time use of TV graphics to reduce the load on its field producers and directors. The key term here is "transition logic": It refers to the ability of a computer-based graphics systems to go from one graphic to another on the same video input, rather than requiring each graphic to be individually cued, switched to and then played on its own discreet channel.

"Achieving functional transition logic is the biggest evolution of TV graphics right now," says Fields. "Being able to seamlessly go from one graphic to another on the same channel makes things easier for the technical director and uses less space on the video switcher. It's a trend being explored by many graphics software makers today, but there is still a long way to go before the problem of transition logic has been fully solved."

In the long term, Fields dreams of a day when a complex series of graphics can be preprogrammed to roll smoothly from one to another in real time, rather than requiring complex presets to be input for each one. "That would make life so much easier," he said.