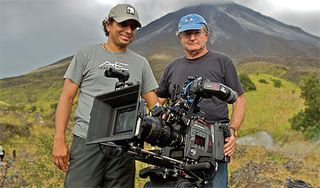 PARK RIDGE, N.J.: Sony's view going into the 2012 NAB Show is decidedly bullish. "I think we have the strongest product line that we've had in years, across acquisition, recording, storage and display," said Alec Shapiro, senior vice president, Sales and Marketing for the company's Professional Solutions of America group.

He described Sony's message for this year's NAB exhibition as "a continuation of what we began last year in terms of our theme of 'Beyond HD.'" At the 2011 show Sony introduced new 4K and 3D cameras, and OLED monitors. Since NAB last year we've delivered all of these technologies."

Director M. Night Shyamalan (L) and Cinematographer Peter Suschitzky on the set of After Earth, the first major motion picture to be shot with the new Sony F65 4K camera. Photo by Frank Masi, SMPSPCAMERA WORK

One of Sony's biggest introductions last year was its F65 camera, with its pioneering Super 35 8K image sensor that exceeded the resolution of any existing digital motion picture camera. Since last April, Sony has delivered more than 100 F65s to a host of motion picture rental companies, along with memory recording devices that attach to the F65 and utilize Sony's SR memory cards with 256 GB, 512 GB and 1 TB capacities.

The F65's first feature film, "After Earth." starring Will Smith and directed by M. Night Shyamalan, is currently in production. Shapiro described the film crew's shooting in Costa Rica as "pretty much a torture test," which the new camera came through with flying colors.

Another camera announced last year that's now shipping and being put to work is Sony's PMW-TD300 3D shoulder-mount camcorder. It was deployed by mobile company NEP in January at the Sony Open golf tournament as part of the 3D telecast. "It worked so well that we were actually able to do two more holes than we had anticipated shooting in 3D," said Shapiro. "And we're getting a lot of interest in the camera on different fronts: certainly sports, and educational/training type applications, where they want to shoot in 3D."

He also pointed to the popularity of Sony's first 35mm camcorder, the F3. "We've had a tremendously successful year selling the PMW-F3 camcorder. We've sold several thousand of these cameras, and have continued to evolve it with upgrades. Most recently we introduced a zoom lens for the F3."

Sony's TRIMASTER EL OLED broadcast reference monitors unveiled last year are also off to a hot start, according to Shapiro. "We've shipped over 2000 of these monitors," he said.

Sony PMW-TD300 3D Camcorder Sony will again be working closely with NBC on the Summer Olympic Games in London, Shapiro said. "NBC is going to be using our Media Backbone Conductor to help it manage its operations at the games." The backbone is a software solution that provides a service-oriented architecture (SOA)-based platform that will link virtually every aspect of the workflow for NBC's production and distribution of the Olympics.

Shapiro said he's been getting a lot of questions about the ENG market. He would not speak specifically about what new cameras to expect from Sony at NAB, but hinted there could be ENG camera introductions. "But it's not as much about the camera as it is about the workflow that supports the camera," he said. "The good news is that we've done several installations of XDNews, which is our news production solution, for about five or six TV stations, and we expect to do more of those. This interfaces with our XDCAM solution, and we're going to have some more to say about storage and archive solutions for broadcast operations."

The 2011 T≈çhoku earthquake and tsunami in Japan occurred barely a month before last year's NAB, badly damaging Sony's manufacturing facility in Sendai. "We had water up to the ceiling of the first floor," said Shapiro. "But if you went to Sendai today, you would never know that had happened. The recovery is quite remarkable."

Damage from the disaster cut off manufacturing of Sony's SRW tape, which Shapiro said probably accelerated a migration to file-based archiving. But with the Sendai production line restored, "we're still shipping SRW tape. Every major broadcaster and post production facility, at least in the United States, has SRW tape decks. Interestingly, we're actually selling new tape decks… there are still a lot of customers out there that rely on the tried and true tape workflow."