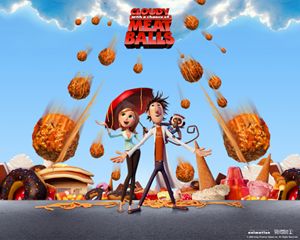 What is likely to be the first Blu-ray title in stereoscopic 3D to be sold individually is slated for next Tuesday, June 22, by Sony Pictures Home Entertainment. Its surprise theater blockbuster "Cloudy with a Chance of Meatballs" will come at the same time that equipment maker Sony will be shipping some of its first 3D-capable Bravia-brand HD panels and Blu-ray Disc players.

While a handful of other titles have been produced in 3D in Blu-ray's 1080p format, up until now they've typically been bundled as come-on extras with expensive 3D hardware — notably 3D-centric HD sets. Viewing 3D content at home requires a special TV, a Blu-ray 3D player, and 3D eye glasses.

"Cloudy," which is among a robust list of computer-animated movie hits in the past year, also will be available in plain old Blu-ray 2D and (really plain old) standard DVD.