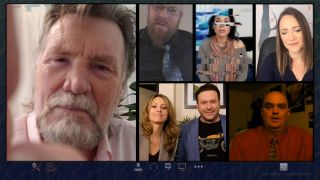 HUNTINGTON BEACH, Calif.—The television and film industries have laid the groundwork for what they hope will be a safe return to production, but a number of projects have attempted remote productions during quarantine, including the latest example, a feature film called “Social Distance.”

The film, written and directed by B. Luciano Barsuglia and produced by Koa Aloha Media, was filmed entirely with actors and crew in their own isolation during quarantine, from April to June.

The story of “Social Distance” is described as a thriller that centers on six individuals experiencing isolation during the COVID-19 pandemic, consumed with the pressure of work and the threat of sickness.

Barsuglia said that the entire film was shot through video conference technology, and that the actors were in charge of setting up their own shots. Post-production work has also been going on while filming was taking place.

“Social Distance” joins the list of “All Rise,” “Mythic Quest” and “Saturday Night Live,” as well as talk shows and news programs, which have been producing content remotely during quarantine.

The trailer for “Social Distance” is below.