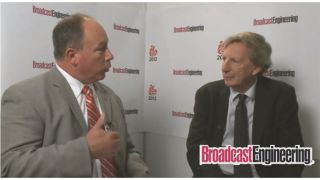 Last week in Amsterdam, Phil Laven, chairman of the DTV Project and vice chairman of FoBTV, stopped me dead in my tracks when he said he was “ashamed” of the decades of competing analog and digital TV standards that have cost consumers and broadcasters billions of dollars.

Laven, who is working with Future of Broadcast Television chairman, ATSC president Mark Richer and other leading television industry representatives from around the world, says agreement on a unified digital terrestrial broadcasting system not only is possible but necessary.

In this video interview, Laven discusses how FoBTV is proceeding and a timetable for what it hopes to accomplish.