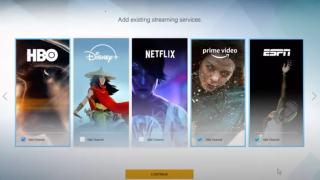 Updated 8/4/2020: U.K. startup ScreenHits TV said it would publicly launch on Monday a new free software product that will unify everything from playback to search/recommendation to billing for multiple major SVOD services.

Given that the big-media-backed streaming services are currently fighting the giant OTT OS platform operators, Roku and Amazon, to keep control of their own apps, the idea that they'd let a small international startup disaggegate their content and control their customer relationships and data seemed liked a reach. But we've played along so far, because it'd be quite the feat if the claim is legit.

As of 5:30 p.m. EST Monday, however, the ScreenHits TV app isn't available in either the Google Play or Apple App Store.

TVT's sister publication Next TV tried to sign up for the service directly on the web via Google Chrome. They punched in personal email addresses and checked off which SVOD services we subscribe to (seeing the now extinct "HBO Go" brand listed as an option was another red flag).

A window surfaced saying they'd be notified shortly about the app and that we should "stay safe" until then.

A rep at ScreenHits's New York PR agency said the site is still in "pre-launch" mode.

"We will pass along the link to the launch homepage as soon as it’s up, so you know when you’ll be able to sign in and start using the service," the rep added.

LONDON—With consumers adding more streaming services, ScreenHits TV has announced its entrance into the market in the hopes of being an aggregator for all of the content available to consumers.

ScreenHits TV has announced that it has launched its service, which enables consumers to house all of their streaming services in a single location, in the U.S. and U.K. on Aug. 3 for $1.99 per month.

Partnering with the major streaming services—Amazon Prime Video, Netflix, Disney+, Hulu, Peacock and HBO—customers can sync all of their services and watch the available programming directly through ScreenHits TV, not needing to switch between platforms. It also consolidates the billing process for consumers’ SVOD services, the company says.

A ScreenHits TV rep told TVT’s sister publication Next|TV that “the majority” of OTT apps on the platform have their content available directly via ScreenHits through “deep links.” However, Netfilx does not provide deep links at this time, according to the rep, meaning that content will be played within Netflix’s video player. The rep says that consumers will not notice a difference however, as the video will play automatically when selected.

A demo video can be watched below: