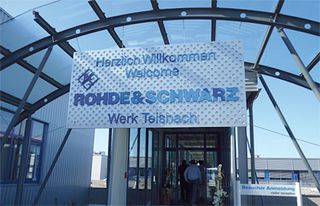 MUNICH, GERMANY—As one of the oldest manufacturers in the broadcast business, German-based Rohde & Schwarz has developed a reputation for developing innovative solutions for transmission and test and measurement technology. It's a status the company takes seriously and has its roots in the company's inception.

Construction is underway that will triple the size of Rohde & Schwarz’s Munich headquarters. Formed in 1933 in Munich as a research laboratory headed up by Lothar Rohde and Hermann Schwarz, two physics students who met at Jena University, the company's initial product was an interference measurer. During World War II, some of the company's facilities were damaged by Allied bombings, but it emerged after 1945 with the U.S. Military as one of its first major post-war customers. Rohde & Schwarz soon developed its first FM radio transmitter for the German market and added television transmitters to its product portfolio in the 1950's. By the early '60's its products were being shipped to most regions worldwide.

Today, Rohde & Schwarz has more than 8,000 employees worldwide and expects to have 10,000 within the next year or two, according to spokesman Eddy Vanderkerken. The company ships to more than 70 countries and 60 subsidiaries, expects record net revenues of $1.6-$1.7 billion for the current fiscal year and claims that it is the leading international supplier in all of its market segments. Its largest market is Europe with an export share of 90 percent.

Rohde officials attribute the company's longevity to its status as a private, family owned enterprise. Being independent is "really key to us," said Thomas Loichinger, head of product management for terrestrial broadcasting systems for Rohde & Schwarz. "We don't depend on any external investors or any other company who would then mandate the way for us to go. There are no banks or investment companies telling us where to go." Loichinger adds that since its inception, there has always been at least one family member on the board of directors. "This allows us to have a longer term strategy and not concentrate on short term results."

Rohde & Schwarz’s broadcast transmitters are assembled in the company’s plant in Teisnach. The company also has a long history of attention to the environment. The company's Munich headquarters is heated and cooled by water and the innovative system will also be in use in the new addition to the building currently under construction. When finished, the new 5-floor addition will house research and development and more than triple the size of its headquarters.

Rohde & Schwarz is among the world's largest developers of test and measurement technology—chances are likely your cellphone was tested or developed with a Rohde test kit. The company's largest division and source of more than 50 percent of its revenues come from sales of its RF test equipment technology. A signal generator is a highly specialized product with a lifespan of approximately 5-6 years, according to Rohde officials. On average, the company sells 5,000-10,000 units, but its most successful test product of all time was the CMU200 (since replaced by the CMU500), which the company sold more than 28,000 units over the its 12-year lifespan.

Rohde & Schwarz is also one of the industry's largest suppliers of broadcast transmission systems and the largest supplier of DVB-T transmitters in the world. Approximately 20 percent of its revenues come from the broadcast division. With the exception of power supplies, nearly every component of its transmitters is assembled at its plant in Teisnach, approximately two hours northeast of Munich. Rohde is one of the region's largest employers with more than 1,100 employees working at the 44,300 square-meter plant.

The company's transmission innovations continued this year with the introduction of the R&S THU9, which it claims boasts the best energy efficiency values for solid-state TV transmitters—up to 28 percent for COFDM and up to 30 percent for ATSC. The transmitter handles all common digital and analog TV standards and fits in a unique MultiTX system that allows the placement of multiple transmitters in a single rack. In ATSC, it can generate 16.5 kW in one rack and 36 kW in two, making it the solid-state transmitter with the highest power density on the market. The THU9 will be ready for delivery by the 2012 NAB Show.

As Rohde & Schwarz expands its headquarters and employee count, the company is also looking to the future in other areas as well, as evidenced by its 2010 acquisition of DVS, a developer of post production technology. In explaining the reasons behind what was considered by many an unusual acquisition, company officials noted that in the film industry, the conversion of enormous amounts of digital film data to other formats is subject to even higher requirements than in the broadcasting industry. Complex algorithms ensure that data coding and decoding is performed at highest resolutions and at maximum speed, with no loss in quality.

"We are confident that Rohde & Schwarz will benefit in the area of development from the transfer of valuable technology from the studio to broadcasting," commented Jüergen Nies head of the broadcasting division at Rohde & Schwarz. "Conversely, we are also keen on DVS continuing to grow on its own–our worldwide sales network in more than 70 countries will help bring DVS products to the global market even more intensively."