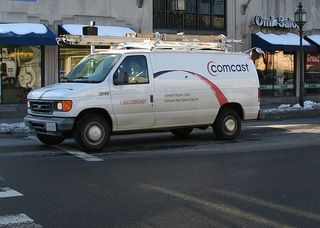 WASHINGTON: There is no shortage of opinions on the proposed takeover of NBC Universal by Comcast. The Federal Communications Commission has compiled more than 10,000 individual filings on the pending merger of the two media powerhouses. Among them, several municipalities and small organizations threw their support behind the deal, which is stirring strong-arming fears among competitors and detractors.

Dennis Hisey, commissioner of El Paso County, Colo., wrote to support Comcast. His letter highlights the leverage Comcast has across its service areas, where it employs around 100,000 people, pays out millions in franchise fees and provides community-access channels.

“As one of our county’s major employers, it supports our families and our economy with job stability and benefits. It also ensures our community’s competitiveness... by providing technologies and services that are mandatory for success. And the local and state tax revenues ensured by Comcast are more important to us than ever.”

“In the past decade, Comcast has made significant infrastructure investments throughout the state, committing billions of dollars to facilitate the latest technologies. Those investments have brought high speed broadband service throughout Illinois, helping small businesses succeed in an increasingly competitive marketplace,” he wrote. “In short, Comcast has delivered on its promise of system upgrades, better cable service and ever-improving broadband internet service.”

Technicolor’s position is no surprise considering its long relationship with both NBCU and Comcast. Support from the municipalities is logical as well, given the largesse they enjoy from cable franchise agreements. The City of Seattle, for example, passed a 10-year agreement in 2006 in which it receives 4.2 percent of Comcast’s gross revenues within the franchise area. The City also received funding for its community-access channel and a local arts programming.

Franchise negotiations and fees have not been without conflict, however. The City of Ypsilanti, Mich., went after Comcast two years ago for between $75,000 and $130,000 in franchise fees related to university dormitory service. Comcast sued San Jose, Calif., in 2003 over demands the municipality laid out in franchise renewal negotiations. Comcast said San Jose was illegally requiring it to build out a free telecom network for the City.

Municipal demands in franchise negotiations became the stuff of lobbying histrionics in 2006 as the big telecom’s got serious about the video business. AT&T and Verizon argued mightily for changes to the FCC’s cable franchise rules, citing instances where local authorities asked for swimming pools and flower pots in exchange for access. The FCC ruled for the telecoms in 2007.

The Comcast-NBCU deal, proposed last December, has drawn opposition from Internet-neutrality supporters and smaller multichannel video providers. Both camps are wary of the nation’s largest TV and Internet provider having control over so much content. The merger would mark the first time a pay TV operator would own one of the nation’s major broadcast networks. Comcast would also get NBCU’s substantial stable of cable networks and its TV production operations.

The FCC is in Day No. 61 of its 180-day shot clock to approve the merger, and recommend any conditions or require divestitures. The shot clock’s been suspended twice, but continues to run even as the deadline to file reply comments on the docket (MB No. 10-56) was extended today by two weeks. The extension was requested by the American Cable Association, a consortium of smaller cable operators that asked for more time to comb through voluminous reports submitted by Comcast and NBCU at the behest of the FCC. Reply comments are now due Aug. 19.
-- Deborah D. McAdams